According to Trinamul insiders, an air of concern started ruling the party’s nucleus supreme as the BJP candidates taking lead in the counting. 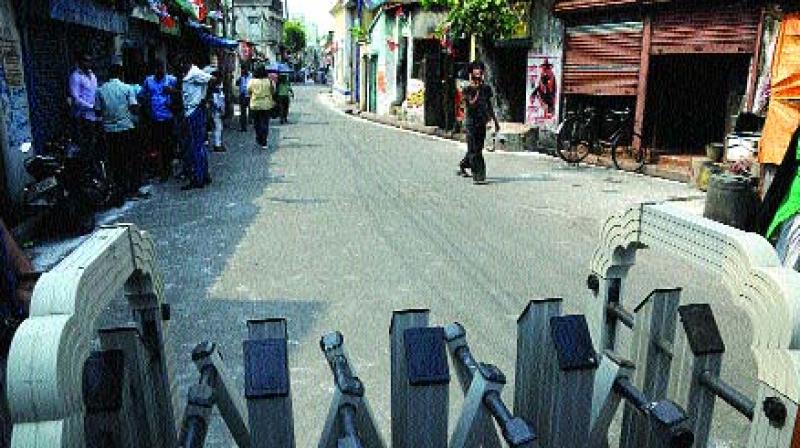 A deserted Harish Chatterjee Street that leads to the residence of chief minister Mamata Banerjee on Thursday. (Photo: Abhijit Mukherjee)

Kolkata: Shaken by the unprecedented saffron storm in her bastion in the Lok Sabha election results, chief minister Mamata Banerjee on Thursday stayed indoors, perhaps keeping her fingers crossed, in what appeared to be a rare occasion during her rule of past eight years in the state.

Although her party: Trinamul Congress was projected in the poll results trend leading in 22 constituencies out of 42, the estimated loss of a dozen more seats, which was in its tally in 2014 Lok Sabha polls, cast a pall of gloom in and around her residence: 30B Harish Chatterjee Street in Kalighat of south Kolkata since morning.

Sensing her worst fear coming true, Ms Banerjee went on Twitter in the afternoon to call for introspection of her party’s Lok Sabha poll performance while the media was kept at bay with the narrow lane up to her residence was closed with barricades in sharp contrast to the mood of celebration at BJP office on Muralidhar Sen Lane in central parts of the city.

“Congratulations to the winners. But all losers are not losers. We have to do a complete review and then we will share our views with you all. Let the counting process be completed fully and the VVPATs matched,” Ms Banerjee, who had campaigned for her party’s victory in all of the 42 seats recently, said.

According to Trinamul insiders, an air of concern started ruling the party’s nucleus supreme as the BJP candidates taking lead in the counting. It was coupled with the poor performance of the Telugu Desam Party of Andhra Pradesh chief minister N Chandrababu Naidu who allied with Ms Banerjee to spearhead anti-BJP movement, sources revealed.

What kept the Trinamul supremo worrying was her party’s dismal show even in the Assembly bypolls in the state.

She had fielded former transport minister Madan Mitra against Pawan Singh of the BJP in Bhatpara seat of North 24 Parganas. He however lost to him.

Till the reports last came in the evening, Trinamul has won Lok Sabha five seats while leading in 17 others with 43.33 per cent of votes closely followed by the BJP with 40.2 per cent of votes.