The Met department warned the weather would persist till Tuesday. 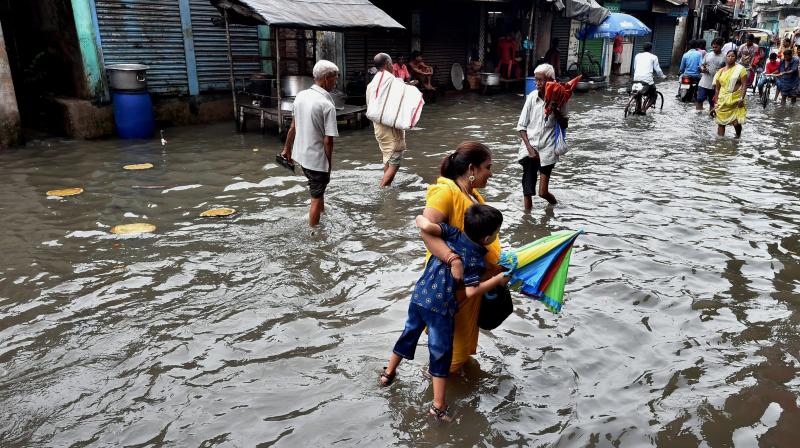 People wade through a waterlogged street after heavy rains in Kolkata on Sunday. (Photo: PTI)

Kolkata: Heavy rains lashed the southern and western parts of the state for the last 48 hours, inundating several low-lying areas and increasing the water level of various rivers. The Met department warned the weather would persist till Tuesday.

State irrigation minister Rajib Banerjee said that in some districts of south Bengal, there had been around 400 mm rainfall in the last three days. “If there is the same amount of rainfall in the next 48 hours that the Met office has predicted, situations may deteriorate. Presently, river Silabati in West Midnapore, Darakeswar in Bankura, Dwaraka and Kuye in Birbhum are flowing above the danger level. We have taken all precautionary measures and the dams have been strictly instructed not to release water without consulting us,” Mr Banerjee said.

The Met department has warned of rough seas along the West Bengal coast and advised fishermen not to venture into the sea. Some villages at Suri block II got flooded due to incessant rain. Some parts of the Hooghly and West Midnapore, including Ghatal, Khirpai, Chandrakona went under water since Saturday night. Bankura recorded the state’s highest rainfall at 274 mm during the same period, while Digha recorded 104 mm and Burdwan received 72.6 mm of rains.