GMCC is divided on attending the dialogue proposed by the government. 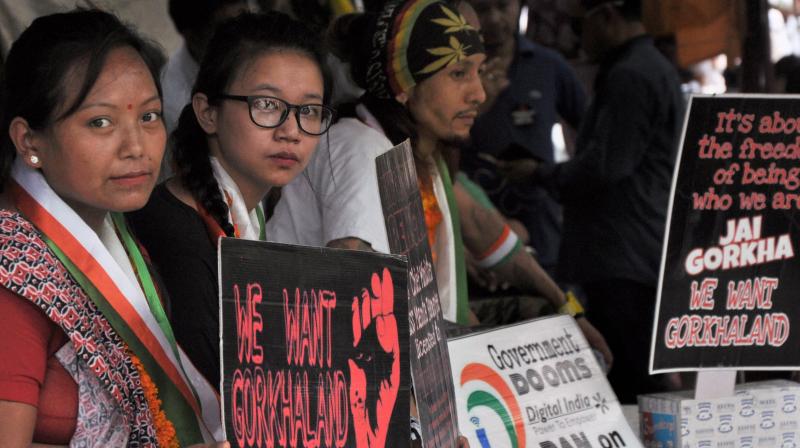 Activists of the Gorkhaland Movement Co-ordination Committee (GMCC) during a hunger strike to demand for separate state of 'Gorkhaland" at Jantar Mantar in New Delhi.

Darjeeling: The Gorkhaland Movement Coordination Committee (GMCC) has convened a meeting on August 25 to decide whether to attend the August 29 dialogue, as proposed by the West Bengal government, after it was left in a quandary over the GNLF’s letter to the state administration, requesting for a discussion on the Darjeeling stalemate.

The Gorkha Janmukti Morcha (GJM) and the GMCC leadership are in a fix over whether to attend the dialogue as they are yet to receive any official invitation from the state government.

The GJM held a meeting to discuss the matter and decided that the GMCC would take a final call on August 25. Several GJM leaders have expressed displeasure over the Gorkha National Liberation Front (GNLF) unilaterally writing to the state government, asking for a discussion on the Darjeeling situation.

“We will discuss the matter at the GMCC meeting on August 25. A dialogue without the GJM or the GMCC, which are the main stakeholders in the Gorkhaland movement, can never be successful. We will wait and see whether we get an official invitation from the government,” a senior GMCC member, who is also a senior leader of the GJM, told PTI.

The GJM-led GMCC, comprising 30 hill parties including the GNLF, is continuing with its indefinite shutdown in the hills which entered its 70th day today. It has taken a heavy toll on normal life in the region.

The GMCC was formed on June 20 to chalk out the future course of action to achieve a separate state of Gorkhaland. The GJM leader said the issue of the GNLF writing to the state government would also come up during the August 25 meeting.

The GMCC, too, is divided on the question of attending the dialogue proposed by the state government. It has not gone down well with most of the GMCC members that the GNLF, on its own, wrote to the government with an appeal for talks, without its prior approval.

The GJM alleged that it was an attempt to undermine it and the GMCC. The GNLF leadership, however, defended its decision to write to the government, saying it was a “sincere effort” to restore normalcy in the hills.

“We have not done anything wrong. We are committed to ensuring peace and prosperity in the hills,” a GNLF leader said. Meanwhile, the police arrested four Gorkhaland activists in the last two days — two from Darjeeling and one each from Kurseong and Kalimpong — for their alleged involvement in the violence in the hills in the month of June.