2 killed, 17 injured in stampede at foot overbridge in Bengal's Howrah

Incident occurred at foot overbridge at Santragachi station when an express train and 2 EMU locals arrived at the station at the same time. 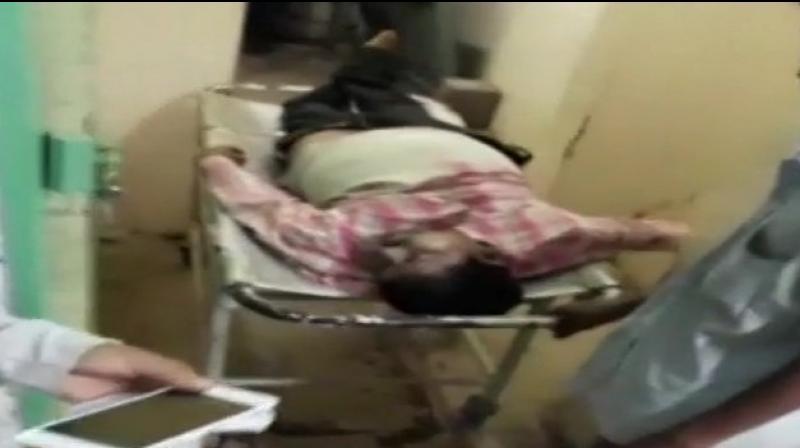 State minister Arup Roy said that 17 others were injured in the incident, of whom some were in a serious condition and were being treated at Howrah General Hospital. (Photo: ANI | Twitter)

Kolkata: Two persons were killed and 17 injured in a stampede on a foot overbridge at the Santragachi railway station in West Bengal's Howrah on Tuesday evening after announcements were made about simultaneous arrival of trains on platforms connected by the overbridge.

The incident occurred at around 6.30 pm between platform numbers two and three at Santragachi station in Howrah when Nagercoil-Shalimar Express and two EMU locals arrived there around the same time and passengers rushed to the platforms to board the trains, South Eastern Railway spokesman Sanjay Ghosh said.

A large number of passengers had deboarded and many others were trying to reach their trains at the same time, leading to rush on the foot overbridge that connected the platforms.

"Two persons have died in the stampede at Santragachi this evening," West Bengal Chief Minister Mamata Banerjee, who visited the station after the incident, said.

State minister Arup Roy said that 17 others were injured in the incident, of whom some were in a serious condition and were being treated at Howrah General Hospital.

Railway officials, however, said that 12 persons were injured.

Banerjee announced a compensation of Rs 5 lakh to the families of the dead and Rs 1 lakh each to the injured from the state government.

The chief minister alleged that "negligence and callousness" on the part of Railways led to the accident and there should be more internal coordination to prevent such a situation.

The incident comes days after the Amritsar tragedy when a festive crowd that spilled onto the rail tracks during effigy burning on Dussehra was run over by a train, leaving nearly 60 people dead.

"I feel there is a gap in coordination and Railways should look into it, they should have given some time gap between the arrival of two trains when the passengers have to change platforms," Chief Minister Banerjee said.

"Such situations occur due to negligence and callousness. Railways should act in a more responsible way," Banerjee, who is a former Railway minister, said.

"Safety and security cannot be compromised," Banerjee asserted and added that Railways did not seek any help from the state government during the festive season for crowd management.

Banerjee, who went to the station from a Durga Puja immersion carnival in the city, said that the state government will hold an administrative inquiry.

Thousands of people use the station every day since it is easier to travel to and from south and central Kolkata from Santragachi.