The chief minister also called for unity among the different chambers of commerce like CII, Ficci, Assocham etc. 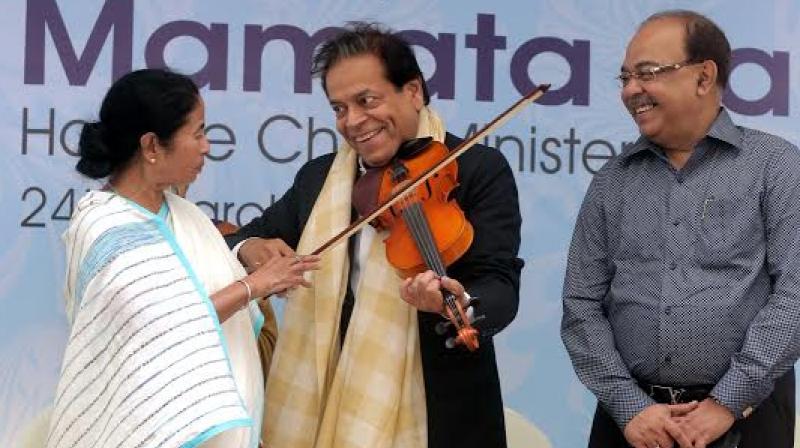 Chief minister Mamata Banerjee looks on as industrialist C.K. Dhanuka plays the violin during the inauguration of a girls’ hostel in Kolkata. (Photo: Abhijit Mukherjee)

Kolkata: Chief minister Mamata Banerjee on Friday urged industrialists to unite and take to the streets, protesting against the Modi government’s alleged use of agencies like CBI and ED to intimidate them. “The time has come for you to bell the cat. Form a collective family and if one of your friends is hurt, then make a team of 50 to stand by him. Then nobody will be able to touch you,” Ms Banerjee said.

The chief minister appealed to young businessmen to be the torch-bearer of such united protest. “Form a collective family and if possible also take the women folk of your residences and take to the streets. Do this for your own business’ sake. You protest under your own banner and the government will extend full support,” she said while inaugurating S.L. Dhanuka Girls’ Hostel in Behala. She also mentioned the name of late BCCI president Jagmohan Dalmiya’s son Abhisekh, who was present at the venue, asking him to form such a “collective team”.

The chief minister also called for unity among the different chambers of commerce like CII, Ficci, Assocham etc.

“If you are a regular tax-payer and do your business legally then why should you be apprehensive of the agencies. Why is it that a chamber should not stand by another during crisis?” Ms Banerjee questioned.

The chief minister also mentioned that the industrialists have went through three months of “troubled times” when the Centre had allegedly unleashed its agencies like CBI, ED and income-tax (post demonetisation) on them. “You should remember how our government had extended cooperation during that time,” she added.

Alleging political vendetta, the chief minister said that she does not fear agencies like the CBI. “Let them send all my party men (to jail). I have another team ready. If one of my team member is put into prison,  I will give birth to lakhs.”

She also alleged too much hurdles posed particularly in the name of ‘environment clearance’ while implementing a project. “We are an elected government but when we embark on a project it has to go through at least 10 hurdles,” she said.