According to the local residents, poor quality of raw materials was being used to build the bridge for which Rs 14 crores were earmarked. 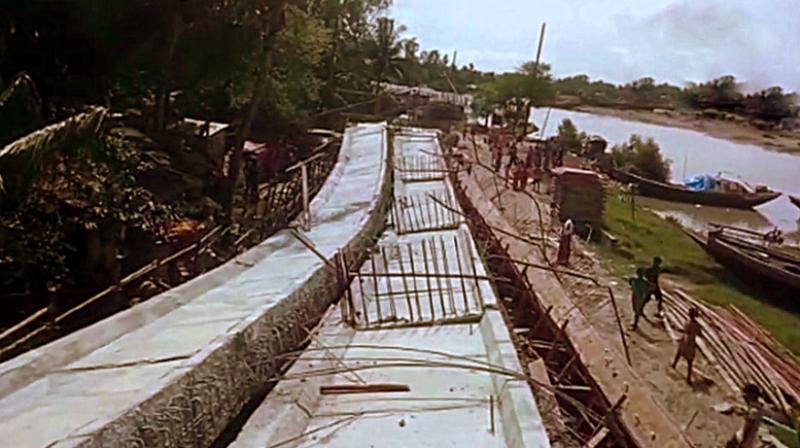 There has been no report of any casualty, South 24 Parganas district magistrate Y. Ratnakara Rao said. (Photo: Twitter | ANI)

Kolkata: An under-construction bridge collapsed at Kakdwip in South 24 Parganas on Monday morning. However, no one was injured in the incident. The accident took place at around 9.30 am near Steemer Ghat. A major portion of the bridge over Kalnagini dislodged leaving the area shaken. The day’s work was yet to begin then.

There has been no report of any casualty, district magistrate Y. Ratnakara Rao said. “The work to clear the debris has started. The area has been cordoned off to stop people from going near the bridge,” Rao said, adding that engineers were trying to ascertain the reason behind the collapse.

A group of workers who had come to join the work said that they saw the concrete chunks coming off with a defeaning sound. According to the local residents, poor quality of raw materials was being used to build the bridge for which Rs 14 crores were earmarked. They also claimed that there were some gaps in the bridge.

This was the third incident of bridge collapse in the state in September.

A portion of a bridge at Majerhat in south Kolkata had caved in on September 4, killing three persons and injuring more than 24.

On September 7, an old bridge had collapsed near Siliguri in north Bengal, leaving a truck driver injured.

The construction began in 2015 was scheduled to be completed by 2021. Sundarban development minister Monturam Pakhira however rejected their allegations.

A district BJP leader claimed that the bridge collapsed because poor quality materials were used for its construction.

State education minister Partha Chatterjee, during a press meet at the state Secretariat, said chief minister Mamata Banerjee will review the condition of bridges and flyovers in the state, including the ones under construction.

“Once she is back from her tour, she will seek opinion of experts on ways to overcome weakness in the structural pattern of the bridges and evaluate the experience of contractors entrusted with the job of building them,” he said.

Ms Banerjee is on a 12-day trip to Germany and Italy to attract investments to the state.