The National Disaster Response Force has launched a search operation to trace other missing people. 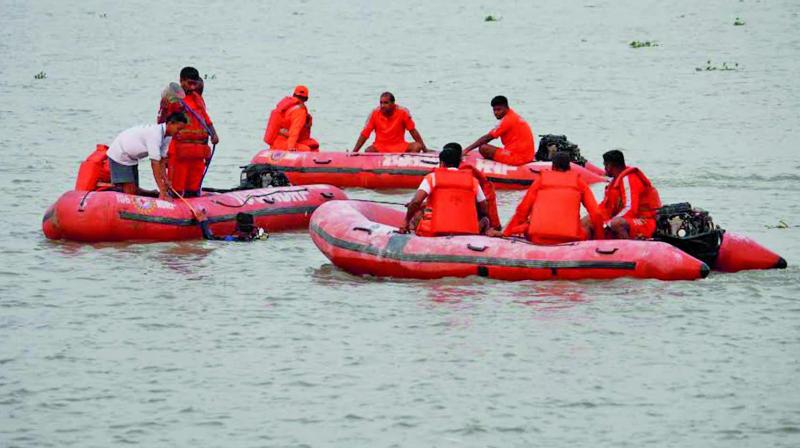 A search operation is being carried out in the Hooghly after the collapse of a jetty in West Bengal. (Photo: PTI)

Kolkata: Three persons died while several others went missing after a temporary jetty broke down and submerged in Hooghly on Wednesday morning.

Mourning the loss of lives, governor Keshari Nath Tripathi expressed condolences to the families of the deceased. He flagged concern over the maintenance of such structures, and called for carefulness by the administration.

Nearly 50 persons were standing on the 150-ft high jetty during the accident that took place at Telenipara Ghat in Bhadreshwar in Hooghly. They were waiting to avail of the ferry service around 11.30am to reach Shyamnagar Ferry Ghat in North 24 Parganas, which is located at the river bank. Suddenly, a high tide hit the jetty, made up of bamboo and wood logs, leading to its collapse.

Several people fell in the river. Superintendent of police (Hooghly) Sukesh Kumar Jain said that 18 people were rescued by the locals in small boats. Three among them were declared brought dead at Chandannagar sub-divisional hospital. The status about others was yet to be ascertained till filling of the report.

Meanwhile, the National Disaster Response Force has launched a search operation to trace other missing people.

State agriculture marketing minister Tapan Dasgupta visited the spot. “Chief minister Mamata Banerjee has inquired of the tragedy. She announced a compensation of Rs 2 lakh for the family of each victim. The expense for treatment of the injured will be borne by the state,” he said. The ferry ghat is maintained by the Bhadreshwar Municipality, which has been accused of the lack of maintenance and safety measures.

A press statement from Raj Bhavan stated, “The governor expresses his anxiety over the missing of about 12 passengers because of break down of a jetty at Telinipara, Bhadreshwar, due to high tide. He also expresses his heartfelt sorrow at the loss of three lives in the incident and conveys condolences to the bereaved families.”

It added, “The governor requests everybody concerned to join hands in the rescue work to ameliorate the sufferings of the victims. He also expresses hope that authorities concerned will be more careful in future.”