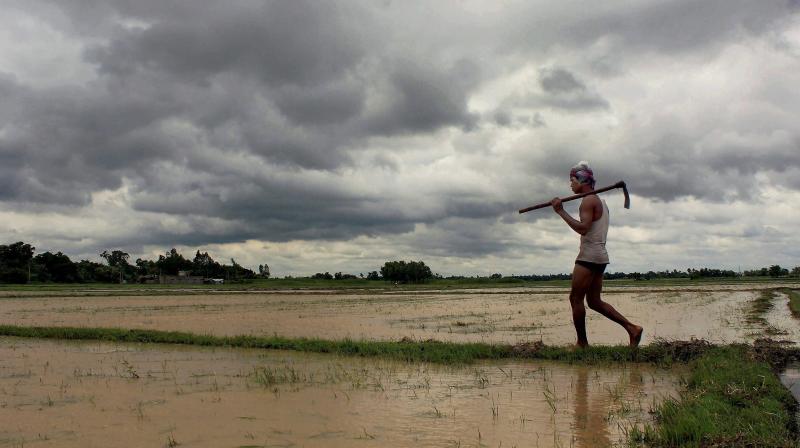 A farmer prepares his paddy field as dark clouds hover over the sky at a village near Balurghat in South Dinajpur district of West Bengal on Wednesday. (Photo: PTI)

“DVC barrages are quite old. They are not cleaned or are dredged from time to time, which has resulted in sedimentation ... If dredging had been done then another two lakh cusec of water could have been stored there,” she said.

“So whenever it is raining in Jharkhand, it is West Bengal that is suffering every year. So just like I do not want others to suffer, we should also not suffer either. I think the Centre must carry out an immediate reform at the DVC,” Ms Banerjee said at Netaji Subhas Chandra Bose International Airport on her return from New Delhi.

The problem that West Bengal faces is that the water released by the DVC barrages every year when it rains heavily in Jharkhand creates a flood-like situation in the state, she said. “Since 2012, we have raised the issue of water release by DVC. But no action has been taken. Even today it (DVC) has released an additional one lakh cusec of water. Because of that three districts — Howrah, Hooghly and West Midnapore (in West Bengal) are facing a flood-like situation,” the chief minister said.

“If dredging was done at Farakka, Bihar would not have faced any problem. No dredging is done in Ganga, Kolkata Port,” she added.

According to a senior official of the state Irrigation department, nearly 106 blocks in the southern part of West Bengal have been inundated and around 50 relief camps have been opened in Hooghly, Howrah, Bankura, Birbhum and North and South 24 Parganas districts.