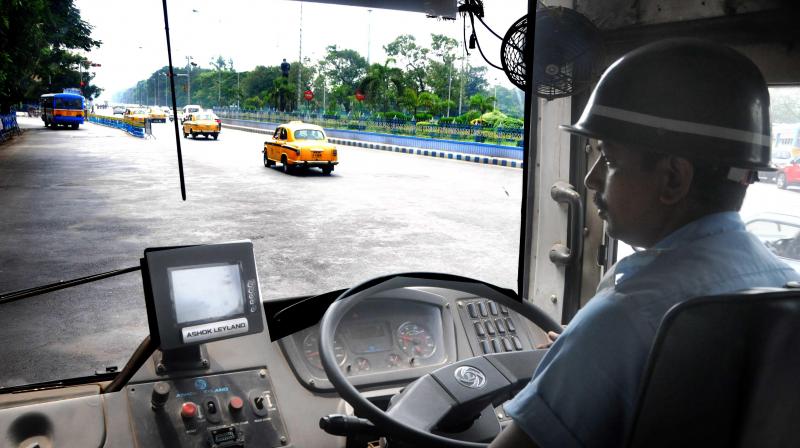 A bus driver is seen wearing a helmet during the strike called by BJP against the state government on Wednesday. (Photo: Asian Age)

Kolkata: The BJP withdrew its statewide bandh, in protest of two students' death in alleged police firing at Islampur in North Dinajpur recently, two hours before its schedule of 12 hours as the public life remained normal barring some stray incidents of violence in the city and districts on Wednesday.

While one bus was burnt on Brabourne Road and four others were torched at Islampur, rail blockade by the bandh supporters jeopardised train movements in the first half of the day.

Compared to other days, the street wore a deserted look to some extent. State BJP president Dilip Ghosh who marched in a rally in the city described the bandh as successful. At around 4 pm he declared of calling of the bandh during a press meet at state BJP headquarters. “Our bandh was a token one. We are giving relief to all from bandh. We are withdrawing our bandh because our purpose was supported by the public. We said the bandh to be peaceful. We did not stop anyone from going out. But the Trinamul Congress workers attacked us and the police also tried to foil the bandh,” Mr Ghosh said.

He said, “ Although schools were open, the students were not there. Buses were on the road. But there was no passengers inside it. The bandh was successful and peaceful also. Nearly 2000 BJP workers were arrested by the police in the state.”

BJP Rajya Sabha MP Roopa Ganguly who participated in a rally in Gariahat alleged, “It is natural that the state government tried to foil the bandh. But the buses which ran on the road hardly had any passenger.” The Eastern Railway (ER) informed that train services were partially affected in its two divisions: Howrah and Sealdah. In a statement it said, “The early morning train services of Eastern Railway's Howrah and Sealdah Divisions were partially affected as the bandh supporters either obstructed train movements or thrown banana leaves on the overhead wires in different stations over various sections of Sealdah and Howrah Divisions.”

It added, “In the Sealdah Division, presently train services were disrupted on Diamond Harbour section as the bandh supporters have thrown banana leaves on the OHE between Hotor - Baruipur at 12.25 hrs. On the Bongaon - Barasat section, banana leaves were thrown on overhead wire, between Bira - Duttapukur at 12.26 pm. Tower vans were despatched to clear the overhead wires.”