Governor says he is ‘eagerly’ waiting to be a part of age old celebrations at CM’s Kalighat residence. 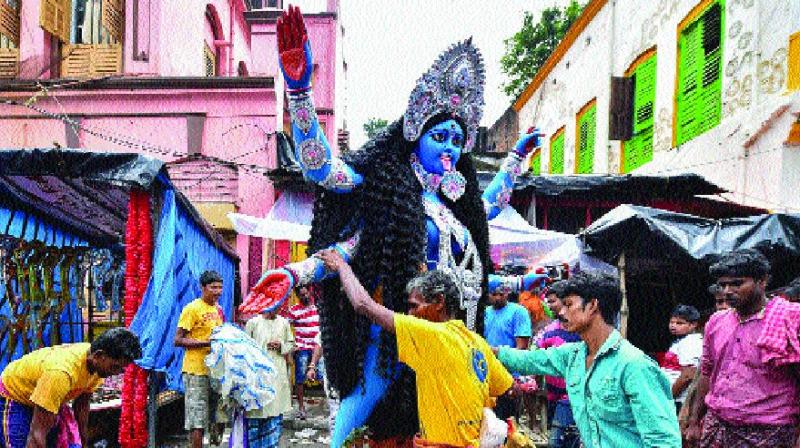 Porters carry an idol of Goddess Kali towards worship place on the occasion of Kali Puja on Saturday. (Photo: PTI)

Kolkata: Burying acrimony, chief minister Mamata Banerjee has invited governor Jagdeep Dhankhar and his wife to her family’s Kali Puja at her residence in Kalighat on Sunday. Mr Dhankar, who had been locked in a war of words with the TMC government on various issues, has accepted her invitation.

He has also informed her that he would definitely visit her family’s puja along with his wife in the evening. The governor said he was "eagerly" waiting to be a part of the celebrations at CM's Kalighat residence.

The governor, who had been critical of the state government for quite some time on many issues since Durga Puja Carnival on October 11, wished in a letter on October 21 to meet the Trinamul Congress supremo at her residence on Harish Chatterjee Street with his wife on the occasion of Bhai Phonta on October 29. A statement issued by the governor's house said that Ms Banerjee, in her letter to Dhankhar on October 24, clarified that 'Bhatridwitiya' or 'Bhai Dooj' was one of those occasions when she reaches out to other communities to spread the message of peace and harmony. The festival will be celebrated on October 29 (Tuesday).

On October 24, Ms Banerjee sent the invitation to him and his wife to her family’s Kali Puja.

On Friday, the governor confirmed his visit to her.

While inaugurating a Kali puja marquee at a club in Barasat, North 24 Parganas district, he said, “I along with my wife expressed a wish to the CM to visit her at her residence on October 29 because the day is important day for brothers and sisters.”

“I asked her to let us know if it would be convenient for her. She was on North Bengal tour then.”

Mr Dhankhar elaborated, “On her return, she wrote a personal letter inviting me and my wife to attend her family’s Kali Puja on October 27.’’

“The Kali Puja has been celebrated at her home since 1978.”

“I along with my wife accepted her invite heartily. Me and my wife are very impressed. We will visit her on Sunday certainly.”

“I thank the CM for her invitation. We have a great wish to witness her Kali Puja.”

He noted, “I feel bowing my head after accepting her invitation in a personal letter from her.”

“I do not feel any need to respond to further questions. Regarding the October 29 date, the CM wrote in her letter that she has been working for communal harmony on that day for the last 30 years.”

Mr Dhankhar likned communal harmony with the pitutary gland in a human body and said "if there is any problem then the body starts suffering."

“The essence of the Indian Constitution lies in harmony and communal harmony and the day the delicate balance of the body is lost then it will be not be good for the country,’’ he stated. He further added, “I will inform what I will do on October 29 only after discussing it with the CM.”

“But I am happy and delighted to tell you about this.” The invitation through the exchange of letters between the governor and the CM is all set to bring down the curtain on the unprecedented clash which had unfolded between them in the past two weeks.

It also came close on the heels of the state government’s objection to the Centre for providing Z-category security status and central paramilitary police force’s protection to Mr Dhankhar after his convoy got stuck amongst agitating students at Jadavpur University, where he had rushed to rescue Union minister Babul Supriyo, who was assaulted.during an event last month.