The 67-page manifesto has been published in Bengali, English, Hindi, Nepali, and Ol Chiki, the tribal Santhali language. 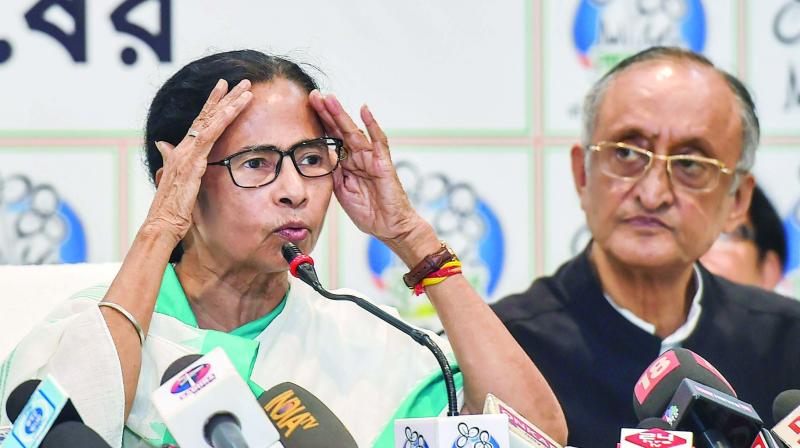 West Bengal chief minister Mamata Banerjee interacts with the media after the release of party manifesto ahead of Lok Sabha Election in Kolkata. (Photo: PTI)

Kolkata: The Trinamul Congress (TMC) will work for the revival of the Planning Commission, institution of a judicial inquiry into demonetisation and a review of the Goods and Services Tax (GST) if the opposition alliance is voted to power in the Lok Sabha polls, its manifesto released by party supremo Mamata Banerjee said Wednesday.

Ms Banerjee, a prime mover behind the efforts to cobble together an anti-BJP alliance of Opposition parties, said she is not fighting for “chair” and that her aim is to rid the country of the “reign of fear”. The West Bengal chief minister also said the 100-day work provision under MNREGA, the government's flagship employment scheme for the rural poor, will be extended to 200 days a year and the wages doubled. “Why was demonetization carried out? We want a judicial probe monitored by a former Supreme Court judge...We will bring back the Planning Commission and ensure that it strengthens the federal structure,” she told a press conference after releasing the manifesto.

The 67-page manifesto has been published in Bengali, English, Hindi, Nepali, and Ol Chiki, the tribal Santhali language.

“We want the GST to be reviewed by an expert committee. If it is really helping people, we would keep it or else we would review it,” she said, but went on to add that both GST and demonetisation have “destroyed” the Indian economy.

Targeting the Modi government over its alleged failure to keep its promise of creating two crore jobs every year, Ms Banerjee said the new government will lay special stress on employment generation and filling up the vacancies meant for Schedule Caste, Scheduled Tribe and Other Backward Classes candidates, including those from the minorities.

Ms Banerjee said women’s empowerment and bringing workers in unorganised sectors under social security cover will be priority areas for the new dispensation.