Several officers injured after some 3,000 attack police station in Burdwan. 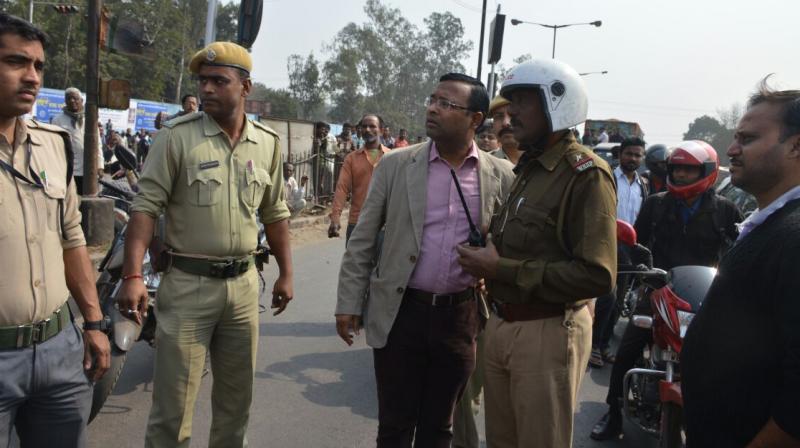 Kolkata: A mob attacked Ausgram police station in Burdwan on Saturday leaving several personnel injured, a day after a similar attack on police in the district and following chief minister Mamata Banerjee’s declaration to bring a legislation holding rioters criminally and financially responsible for vandalism of public property.

The police could not confirm what led to the attack while denying it was linked to Friday’s attack, in which a group had attacked officers and blocked the arterial Ausgram-Guskara road while protesting against the detention of three school teachers. “The mob attacked the police station with brickbats following which reinforcements were sent. We are now at the spot. Three policemen were injured,” Burdwan superintendent of police Kunal Agarwal said, adding IG, Burdwan range, Rajesh Kumar Singh was also supervising the area.

Soon after the incident, a high-level meeting was held at Nabanna to review the situation in which home secretary Moloy De, DGP Surajit Kar Purkayastha and ADGP (law and order) Anuj Sharma were present. Stating that some people have been identified, Mr Agarwal said, “After interrogating them we will come to know who were involved in it”.

Sub-inspector Dipak Pal, who was at the police station at the time of attack, was seen on TV channel crying while describing the incident. He claimed some 3,000 people attacked them, set rooms on fire, and damaged police vehicles and barracks. “They pelted big stones. I tried to lock the gate to stop them but I failed. We could not imagine we would be attacked so violently?” he said, adding seven to eight officers were injured.

Local TMC MLA Abhedananda Thunder alleged that the incident was “masterminded” by opposition CPI(M). In a late-night development, the police arrested Trinamul Congress’s Guskara  councillor Chanchal Garai for allegedly leading the attack on the police station. ADGP Sharma confirmed the arrest, saying the councillor has been booked on charges of arson and rioting.

By Saturday evening the police had arrested 17 people. Burdwan SP and DM later went to the nearby Sukhadanga village and held a meeting with the locals. On Friday, an angry mob had attacked the police after three school teachers were detained, with attackers alleging they were manhandled by the police. Hudrends of students had carried out a protest demonstration and blocked roads. The police lathi-charged the agitators to disperse the unruly mob. On Saturday morning, it released the school officials who had been detained.

The SP said the attack on Saturday has no link with the earlier one as the matter on Friday had been “peacefully settled”. The repeated attacks come amid the CM showing a tough stance against mobs vandalising government property and attacking officers on duty. “We will table a new Bill in the next Assembly session. Those who vandalise or set afire public property will have to pay for the damage, and their (private) property could be attached for the purpose. We are going to be very tough,” she had announced while speaking at the police investiture ceremony on Friday. On January 17, residents in Bhangar and the police were involved in a violent clash in two had died.