Crowded bus falls into river, 33 die, many others missing

The bus driver was recruited by the Murshidabad Bus Owners’ Association. 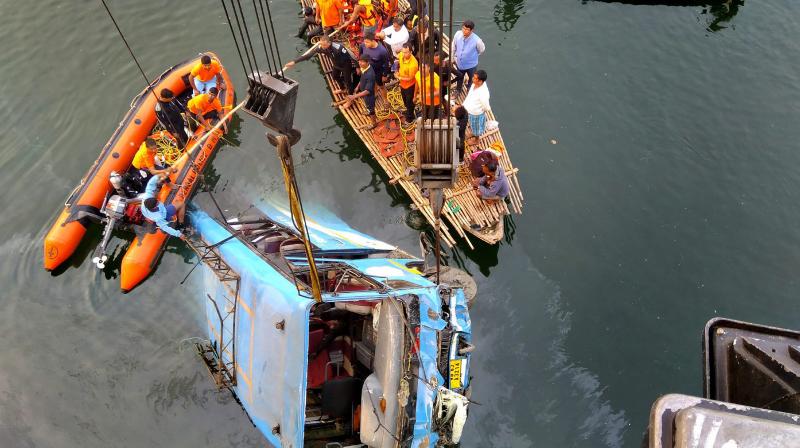 Rescuers pull out the ill-fated public bus which fell into the Bhairab river in Murshidabad. (Photo: PTI)

Berhampore: In what appears to be the worst bus tragedy in West Bengal, at least 36 persons were killed while several others went missing after a government bus carrying nearly 60 passengers fell into a river from a bridge in Murshidabad early on Monday. The toll is likely to rise.

SP Murshidabad Mukesh Kumar said that 36 bodies have been fished out so far. Of them, 10 are female, two children and 26 male. Rescue operation has been stopped for Monday. Rescue will start again on Tuesday.

At around 6.10 am, the North Bengal State Transport Corporation (NBSTC) bus crashed the concrete railing of Nalini Baske Bridge, popularly known as Balirghat Bridge, over Gobra river at Daulatabad after losing control on its way to Malda from Karimpur in Nadia. Most of the passengers were asleep then.

Beating the cold, the local residents jumped to rescue. They alleged that neither the police nor the disaster management group personnel were prompt to reach the spot. According to them, a police team came three hours later. They came under attack as an angry mob pelted stones at them.

Initially, small boats were used to trace the bus exposing the pathetic infrastructure of disaster management in the state. Later, the National Disaster Response Force (NDRF) personnel were pressed in the search and rescue operation. They took out 33 bodies and rescued 10 passengers from the bus. Out of the 33 bodies, four were identified before being sent for post-mortem.

The bus was located in the afternoon with the help of four giant cranes. The NDRF personnel broke the emergency exit glass of the bus to take out the bodies. Meanwhile, chief minister Mamata Banerjee rushed to the spot. She announced Rs 5 lakhs as compensation to family of each victim.

Ms Banerjee also supervised the search and rescue operation. In the evening, she along with transport minister Suvendu Adhikari visited Murshidabad Medical College and Hospital (MMCH). The chief minister said, “It  was a very unfortunate incident. There is no word to offer consolation. The search operation will continue whole night.”

She directed Mr Adhikari and Trinamul Congress MLA of Karimpur Mohua Mitra to camp at the spot. A statement from the Raj Bhavan said that governor Keshari Nath Tripathi expressed his heartfelt sorrow at the loss of lives in a tragic bus accident in Murshidabad near Daulatabad and he conveyed condolences to the bereaved families.

Sajeda (22) boarded the fateful bus from Domkal alongwith her husband Ali Bux and their two-year-old daughter Suriya Khatun to reach Berhampore to attend a physician. She recalled she heard a deafening sound before realising that their bus falling in the river. She alleged that bus driver Sentu Sheikh was busy talking on mobile phone which led to the accident.

The bus driver was recruited by the Murshidabad Bus Owners’ Association. He is also missing. Another survivor Marjia, who is a nurse at MMCH, recalled that she had boarded the bus from Hitanpur bus stop to go to her duty. She however added that she was still clueless how she survived.

According to her, she fell unconscious after suffering a severe pain on her chest before regaining sense and finding herself in one of the fishing boats which were roped in for rescue.