36 bodies were found, 8 injured were rescued on Monday after 9 hours of rescue operations that had to be discontinued due to low visibility. 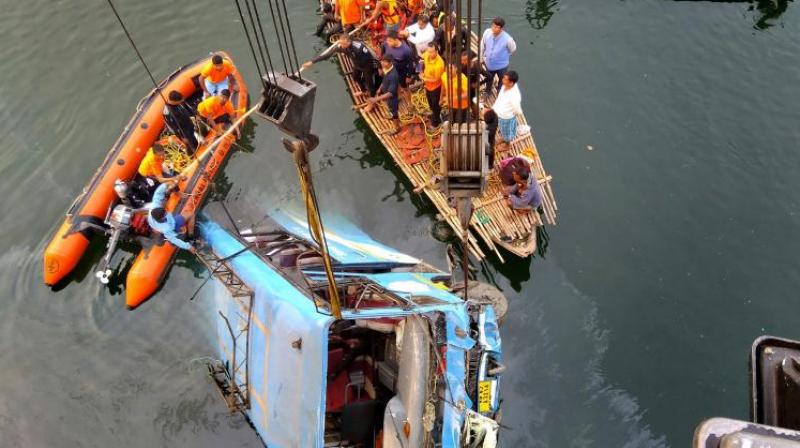 The accident occurred at Balirghat under Daulatabad police station area around 6 am when the North Bengal State Transport Corporation (NBSTC) bus was going from Shikarpur in Nadia district to Malda. (Photo: PTI)

Kolkata: Operations resumed on Tuesday morning to find bodies of passengers of a bus that toppled over a bridge and plunged into a canal in Murshidabad district. Thirty-six bodies were found and eight injured persons were rescued on Monday after nine hours of rescue operations that had to be discontinued because of low visibility last night.

“We are guessing that there can be a couple of more bodies stuck in the water bed and rescue operations have started at 7 am,” Murshidabad District Magistrate P Ulaganathan said. Deep divers of the National Disaster Response Force (NDRF) and State Disaster Management personnel were conducting the operations, he said. The district magistrate, senior police officers, including the SP are on the spot.

Anguished by the bus accident in West Bengal’s Murshidabad. My thoughts and prayers are with those who lost their loved ones: PM @narendramodi

According to him, the total number of passengers travelling in the bus was yet not confirmed, but it could be around 50. “Till last night 36 bodies have been recovered and eight persons have been rescued who are undergoing treatment at the Murshidabad Medical College,” he said. Of the 36 dead, the bodies of 25 were identified, he said.

As many as 32 bodies were retrieved from the bus after it was lifted from the canal on Monday. Earlier in the day, two bodies were found and two others succumbed to injuries. When asked about eyewitnesses’ claims of the bus driver speaking on his phone while speeding that could have led to the accident, the DM said, “It is still not clear what was the reason. But there was fog in the morning and visibility was poor. We are looking into the matter.”

Very sad to learn about the horrific bus accident in Murshidabad, West Bengal. Condolences to the bereaved families and wishing an early recovery to those injured #PresidentKovind

Another official said, forensic tests would be conducted on the bus to ascertain the causes of the accident. “Forensic experts will check whether there was any problem with the engine or if there was any technical problem,” the official said. Chief Minister Mamata Banerjee, along with state transport minister Suvendu Adhikari had rushed to the district on Monday night to supervise rescue operations.

Banerjee, who stayed back at Baharampore last night, had announced a compensation of Rs 5 lakh each to the family of those killed in the accident and Rs 1 lakh for the seriously injured. She also announced that Rs 50,000 would be given to the other injured people.

The accident occurred at Balirghat under Daulatabad police station area around 6 am when the North Bengal State Transport Corporation (NBSTC) bus was going from Shikarpur in Nadia district to Malda.