BJP preparing a Plan B for Maharashtra? 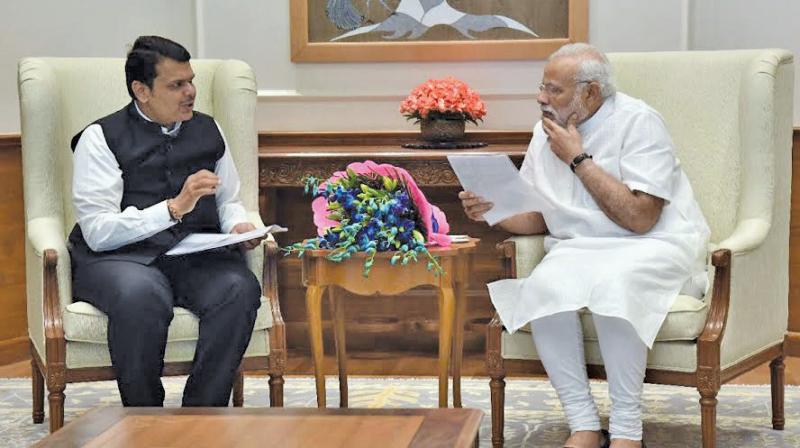 Mumbai: Maharashtra chief minister Devendra Fadnavis’ 90-minute meeting in Delhi with Prime Minister Narendra Modi on Tuesday has fuelled talks about his government’s survival. With Sena showing signs, via comments made by party chief Uddhav Thackeray, that it may ditch Bharatiya Janata Party (BJP) in the state, the fate of the Fadnavis government is uncertain. Mr Fadnavis rushing to Delhi in this situation is being interpreted as a sign BJP is formulating a Plan B to save its government in the state.

Mr Fadnavis was in Delhi for a whole day to meet various ministers, including Mr Modi. He met Mr Modi at the latter’s official residence on number 7, Lok Kalyan Marg morning. In Mumbai, it was rumoured in political circles that the CM had briefed the PM about the political situation in Maharashtra.

Shiv Sena, the junior partner in the Fadnavis government, is exploring options to win the mayoral election in the Brihanmumbai Municipal Council (BMC) without BJP’s support. In this regard, Sena leaders are in talks with Congress and other smaller parties. If Sena manages to win the mayor’s post without support from BJP, it may consider withdrawing its support for the state government.

Therefore, on Tuesday BJP insiders were trying to put the situation in perspective in Mumbai. Referring to the BMC authority’s clearance of land of the mayor’s bungalow in Dadar for it to be turned into a memorial for Sena founder Bal Thackeray, they claimed it was BJP’s attempt to indicate that it is willing to take a step towards patching up its relationship with Sena. However, the Sena leadership has not responded wholeheartedly to this development.

As a result, the BJP leadership seems to be exploring other possibilities to save its government. BJP insiders in Mumbai were claiming that Mr Fadnavis might have taken clear guidance from Mr Modi about whether and how much he should work towards saving the party’s ties with Sena.

There has been a buzz in BJP circles in the past two to three days that BJP national president Amit Shah has clearly told Mr Fadnavis not to give up the mayor post in Mumbai. BJP insiders were indicating that Mr Fadnavis could have taken the PM’s guidance on the mayoral election, a key issue that could alter the future of the alliance and also the government.