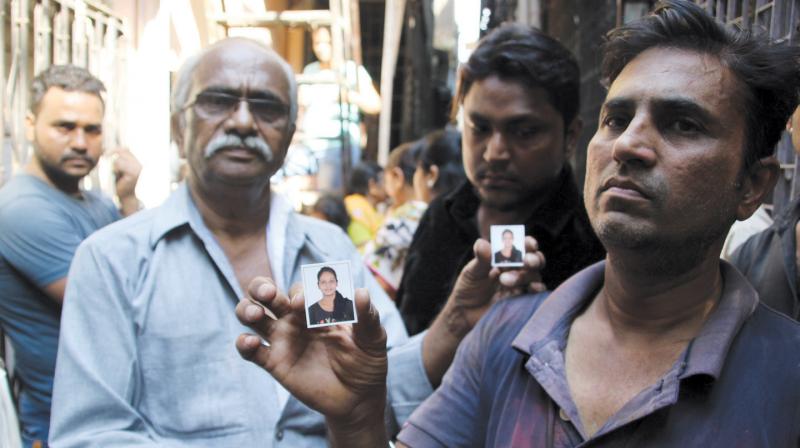 Meghna Agavne’s father Rajesh holds a photo of the girl.

Mumbai: A 15-year-old girl, Meghna Agavne, was allegedly killed after her father accidentally fell on her with a knife, stabbing her during a local scuffle.

The Goregaon police has registered a case of murder against the deceased’s father, Rajesh (44), and the accused’s neighbours, Manda and Subhash Ghoderao, along with four other female members of the Ghoderao family.

The police has arrested the Ghoderao family and is yet to arrest Rajesh. The arrested accused will be remanded in police custody until Friday, while the police will continue investigating the matter.

When The Asian Age spoke to the family of the deceased, her elder sister Pooja, who was present at the time of the incident, dismissed the police’s claims of that her father had accidentally stabbed Meghna.  Instead, Pooja claims that Meghna fell on the edge of a tile after which she and her father fell on her. The girl said that Meghna was a Commerce student of Valia college in Andheri who aspired to become an architect. “She had big plans for her future and she always stood first in her class,” said Pooja.

According to the police sources, Meghna had an argument with Manda as she walked past the narrow lane adjoining the latter’s house, where Manda was washing clothes. When the verbal argument got violent, Meghna was allegedly beaten up Manda and other women, following which Meghna’s mother Savita (41) filed a non-cognisable (NC) complaint against her.

A police source said, later in the evening, when Pooja went to clarify the matter, both the sisters were beaten up by the Ghoderao family. On seeing this from the mezzanine floor balcony, Rajesh came to his daughter’s rescue with a knife. When the crowd pushed Rajesh, he fell on his daughter, accidentally stabbing her in the stomach. The family immediately rushed Meghna to the civic run Siddharth Hospital, but she was declared dead before arrival.

Speaking to The Asian Age, DCP Vikram Deshmane of Zone 11 said, ”An offence against seven persons involved in scuffle, including six members of the Ghoderao family, has been registered and the investigation is on. The Ghoderaos have been arrested under Section 304 for culpable homicide not amounting to murder and other relevant sections of the Indian Penal Code.”

The police is going to probe the case, keeping in mind all aspects, and will be questioning the neighbours as well as the family to clarify the minute details. The police has registered a case of murder, unlawful assembly, voluntarily causing hurt and rioting under section 304, 323, 143, 147, 148 and 149 of the Indian Penal Code.