The Shiv Sena, meanwhile, held a protest today against the “unjustified” fee hike in front of the school gate against its management. 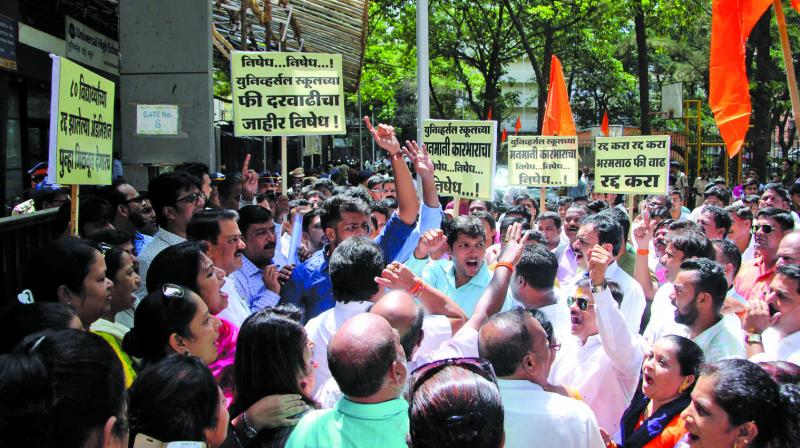 Mumbai: Responding to the Dahisar-based Universal School’s decision to expel 20 children, whose parents were against allegedly arbitrary fee-hike, state education minister Vinod Tawde on Wednesday said that if a kid is removed from the Universal School for not paying the fee, he will cancel the state’s NOC given to the privately-run school.

When contacted, Mr Tawde told The Asian Age, “I have issued a notice to the Universal School's management in this regard and also ordered the Education Officer to probe the matter.” He said, “Tomorrow there would be hearing held in the afternoon in front of  Fee Regulatory Committee (FRC) for the Universal High School’s fee hike issue.” “As per the rules no student should be expelled,” the education minister said on Tuesday.

The Shiv Sena, meanwhile, held a protest today against the “unjustified” fee hike in front of the school gate against its management. However, the school management has verbally assured the parents that the students who were expelled will be re-admitted.

The parents received letter from school management stating, their kids have been de-enrolled from the school for non-compliance of school requirements of admission process to the next grade and also for non-payment of fees applicable for academic year 2017-2018, as alleged by parents. Parents from the Universal School has also initiated talks with the minister on the same but parents were not happy with it. Talking to The Asian Age, a parent, Tejaswini Rajadhyaksh said, “Today, the Sena protested with us in front of school gate. The management has made verbal assurances saying they will not remove kids from school.”

Jesus Lall, chairman of the Universal High School said, “There were protests. We have assured them that we will take their children if they are ready to pay the increased fees.”