The mandal will not install the Ganesh idol this year, Lalbaugcha Raja Ganeshotsav Mandal's secretary said 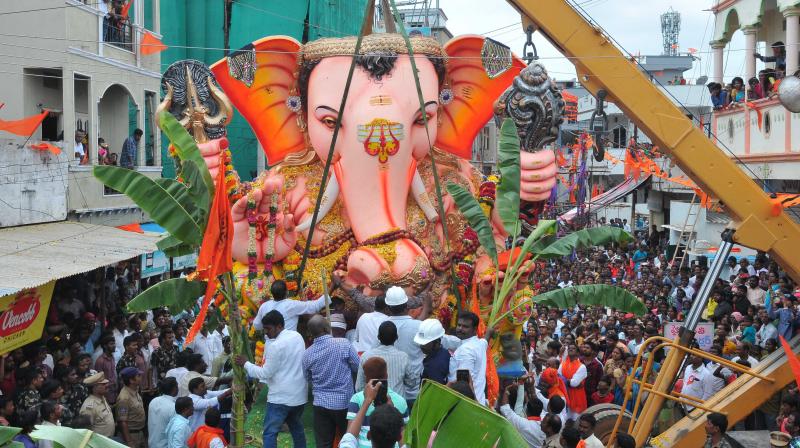 Lalbaugcha Raja Ganesh Mandal on Wednesday announced cancellation of the Ganesh Chaturthi celebration this year in view of the COVID-19 pandemic. (PTI Photo)

Mumbai: The Lalbaugcha Raja Ganesh Mandal, which installs Mumbai's most famous Ganpati idol, on Wednesday announced cancellation of the Ganesh Chaturthi celebration this year in view of the COVID-19 pandemic.

It will organise blood and plasma donation camps and provide financial assistance to the families of policemen who died of COVID-19, he said.

The 10-day festival begins on 'Ganesh Chaturthi', which falls on August 22 this year.

The Lalbaugcha Raja Mandal has been installing the Ganpati idol at its pandal in Central Mumbai since 1934.

"We have decided not to install the Ganesh idol this year and instead, celebrate the festival by organising blood donation and plasma donation camps. We are giving Rs 25 lakh to the chief minister's relief fund," Salvi said.

"We will provide financial assistance to the families of policemen who have succumbed to coronavirus. We will also honour the families of 20 soldiers who were martyred during clashes with Chinese soldiers in Ladakh," he added.

Ganeshotsav is the most popular festival in Maharashtra. The pandals set up by various mandals in Mumbai and other places in the state attract thousands of devotees during the 10-day festivities.

The GSB Ganeshotsav Samiti in Wadala area has already postponed the celebration to 'Magh Shudh Chaturthi' in February next year, a samiti official earlier said.

He said the threat of coronavirus is not yet over and therefore, it will not be possible to celebrate the Ganesh festival with the usual pomp and gaiety.

He also said Ganesh mandals should not install idols with a height of more than four feet during the festival.