Around 37 were injured, while around 5 to 6 — including workers of a ground-floor sweet shop — are suspected to be trapped beneath the debris. 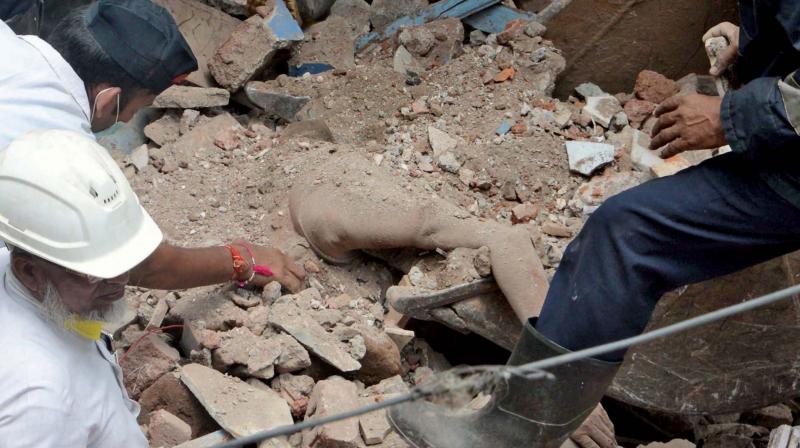 Mumbai: The Saifee Burhani Upliftment Trust (SBUT) had shifted seven families of the ill-fated Hussaini building — which housed 12 residential and one commercial tenant — in 2013-14, but the remaining occupants didn’t take up its offer.

According to a statement released by the trust, the Maharashtra Housing and Area Development Authority (Mhada) had issued notices dated March 28, 2011 and May 20, 2016, declaring the building dilapidated. After receiving the first notice, the trust obtained an NOC for redevelopment from Mhada and offered transit accommodation to its occupants.

Many residents, however, chose to stay behind, which proved fatal on Thursday morning when their home came crashing down, killing 25 people.

Around 37 were injured, while around 5 to 6 — including workers of a ground-floor sweet shop — are suspected to be trapped beneath the debris.

Around five families occupied the building and a sweet shop, popularly known as ‘Tavakkal’, occupied the ground floor premises. “It is true that the developer was giving alternate accommodation, but we did not want to move as we already had bought a house at Dockyard Road and were preparing to move there shortly,” said Ismail Mushram, a survivor.

While the Brihanmumbai Municipal Corporation (BMC) usually cuts off the electricity and water supply of such buildings, this was also not done despite two notices being released by the housing authority. BMC officials, however, pointed fingers at Mhada.

“Mhada declared it dilapidated and also sent notices under its name, so naturally Mhada is solely responsible for cutting off the electricity and water supply,” said Jivak Ghegadmal, assistant municipal commissioner of the ‘C’ ward.  However, a Mhada official said the responsibility lay with the developer, who’s in charge of redevelopment.

Meanwhile, housing minister Prakash Mehta, who visited the site on Tuesday, emphasised the need for a law that would enable forceful eviction. “After such devastating incidents occurring repeatedly in our city, it has become necessary to form a law which would be concerned with forceful eviction,” he said.