Cough up a fine for unruly behaviour on railway platforms

Rail ministry has asked officials to discipline commuters who push others on bridges. 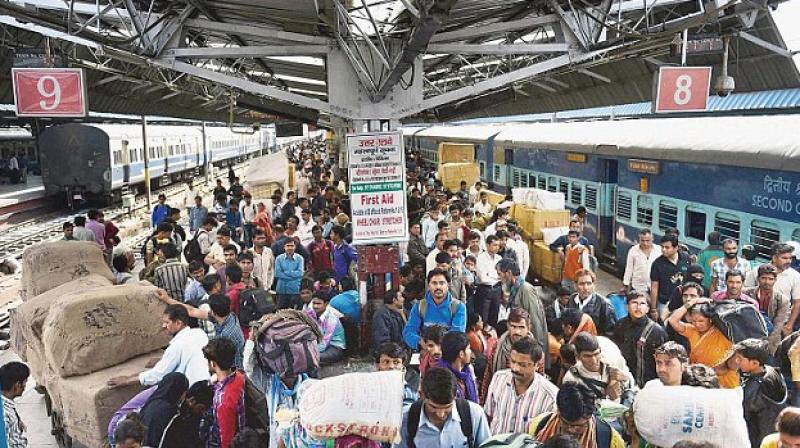 The railways are also looking into the possibility of finding a loophole that will at least allow them to detain violators in custody as a warning sign. (Photo: PTI)

Mumbai: You might have to cough up a fine the next time you inconvenience others on a crowded platform during rush hours. The railway ministry has asked rail officials to discipline people who push others on platform and FOBs. The fine is still being determined. However, the plan is being drafted at a time when RPF personnel have been directing passengers and trying to get them to line up on the crowded FOBs.

The onus till now has been largely been the railways, but after the Elphinstone Road FOB stampede, commuters will now be held responsible for any behaviour that might endanger the life of other commuters. According to a rail official, “The Elphinstone Road tragedy will always haunt us. But in general, if you have seen the crowd on any FOB or platform, nobody cares about what will happen if they push past you or do something that might physically harm you.” The railways top brass feels that this way of thinking needs to change and a sense of responsibility needs to be inculcated amongst commuters. The official added, “After losing 23 lives in the stampede, Mumbai cannot afford to think like this anymore.”

Although the fine has not been determined yet, the railways are looking into which part of the Railway Act fine can be implemented as most are related to damaging railway property. The railways are also looking into the possibility of finding a loophole that will at least allow them to detain violators in custody as a warning sign.

Act 153, which is being considered, states “If any person by any unlawful act or by any willful omission or neglect, endangers or causes to be endangered the safety of any person travelling on, or being upon any railway, or obstructs or causes to be obstructed or attempts to obstruct any rolling stock upon any railway, he shall be punishable with
imprisonment for a term which may extend to five years.”