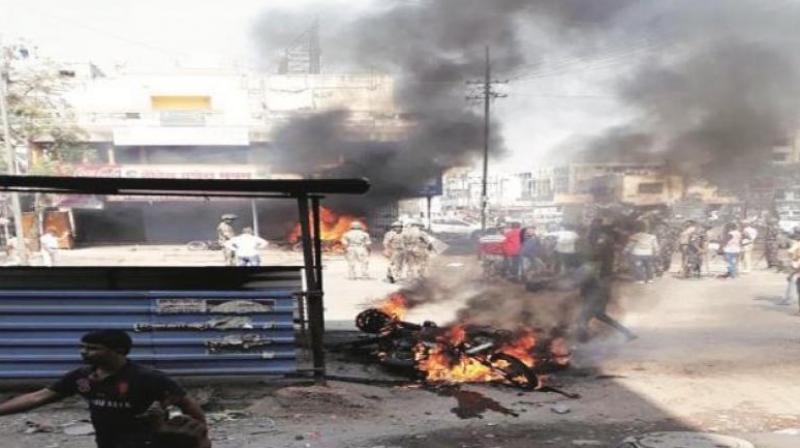 Soon after the protests escalated in Mumbai and suburbs, police swept into action to avoid any untoward incidents. Police personnel donned riot gear and patrolled the protests hit areas where incidents of stone pelting were reported. (Photo: ANI)

Mumbai: Dalits took to streets in parts of Mumbai on Tuesday to protest against the violence which ignited in Pune on Monday.

Soon after the protests escalated in Mumbai and suburbs, police swept into action to avoid any untoward incidents. Police personnel donned riot gear and patrolled the protests hit areas where incidents of stone pelting were reported.

Traffic was hit on the Eastern Express Highway near Mumbai and local train services were also disrupted.

A protester who was trying to immolate himself was saved just in time.

More than 100 people have been detained over different locations, news agency ANI reported the Mumbai Police PRO as saying.

Reports quoting eyewitnesses said the commotion commenced at Chembur naka. The police reached the spot and brought the situation under control. Unconfirmed reports also suggest that a bus was stoned at during the protests.

Violence was also reported from Powai, Mankhurd, Bhandup, Govandi, Sion and Mulund where several shops were forced to pull down their shutters.

The protesters blocked roads in several areas of Mumbai, forced shops to shut down. A few shops that stayed open were vandalised. Outlets in Ghatkopar were also closed.

A journalist of a television news channel was also attacked by a group of protesters in the Amar Mahal area near Chembur station. However, he escaped unhurt.

Hundreds of protesters gathered in Priyadarshini, Kurla, Sidharth Colony and Amar Mahal areas on the Eastern Express Highway, took out processions and raised slogans against the government and the administration.

The protesters stopped local train services at the Govandi and Chembur railway stations of the Harbour Line.

Central Railway's Chief PRO Sunil Udasi said the agitators came out on tracks and stopped the suburban services, though the railways has nothing to do with the incident.

Mumbai Police on its Twitter page requested citizens not to spread rumours.

Clashes between Dalit and Maratha groups broke out on Monday during an event to mark the 200th anniversary of the Bhima Koregaon battle in Pune district.

Dalit leaders commemorate the British victory, as it is believed that soldiers from the Mahar community -- then considered untouchable -- were part of the East India Company's forces.

However, some right-wing groups in Pune had expressed opposition to the celebration of 'British' victory.

Incidents of stone-pelting and vandalism occurred at Bhima Koregaon in Shiroor tehsil on Monday afternoon when people were heading for the war memorial in the village, police said.

The violence erupted after a local group and some members of the crowd on its way to the memorial, had an argument over some issue.

"Stone-pelting started after the argument. During the violence, some vehicles and a house in the vicinity were damaged," a police officer deployed for security at Bhima Koregaon said without elaborating.

He said the police stopped traffic on the Pune-Ahmednagar highway for some time following the incident.

Mobile phone networks were also blocked for a few hours to stop circulation of inflammatory messages.

The battle of Bhima Koregaon was fought on January 1, 1818. Some Dalit leaders and thinkers view its outcome as a victory of oppressed classes over the upper-caste establishment of those times.

Union Minister of State for Social Justice Ramdas Athawale demanded police protection for Dalits in the wake of Monday's violence.

"Dalit groups visiting Bhima Koregaon were stopped at Sanaswadi near Koregaon. Stones were hurled at them. No police force was available for their protection," Athawale said in a statement.

He also appealed to Maharashtra Chief Minister Devendra Fadnavis to deploy additional police force in the village and provide protection to the members of local Dalit community.

Chief Minister Devendra Fadnavis ordered judicial enquiry for Bhima Koregaon incident and has also ordered a CID enquiry for the death of a youth and an assistance of Rs 10 lakh to kin of the victim who died on Monday.

He said strict action will be taken against all those who spread rumours and try to invoke violence.

Meanwhile, the situation in Pune remained under control on Tuesday with Section 144 still imposed in the area.