Ramdas Athawale, the union minister of state for social justice, visited the spot and offered his tributes. 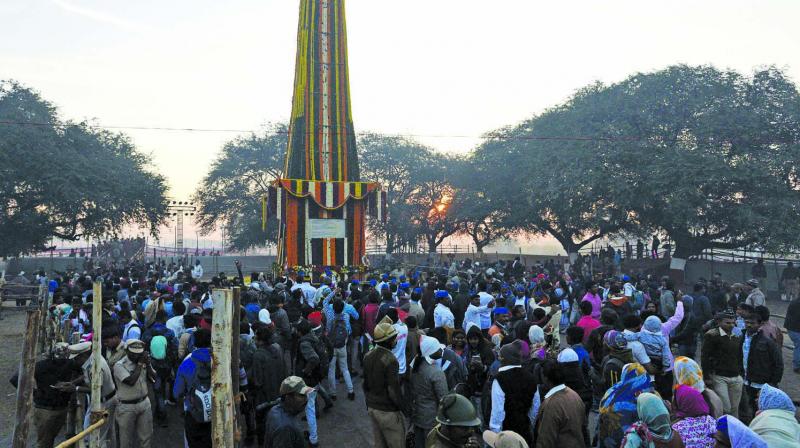 Mumbai: The state authorities heaved a huge sigh of relief as the event to commemorate the 201st anniversary of the Bhima-Koregaon battle went off peacefully on Tuesday. While lakhs of people, mainly dalits, visited the ‘Jay Stambh’ (war memorial) at Bhima-Koregaon, no untoward incident was reported, unlike last year, when one person was killed and several others injured in the riots.

According to sources, this year witnessed the highest turnout of dalit devotees who visited the war memorial, which was erected by the British as a memorial for the soldiers killed in the Bhima-Koregaon battle on January 1, 1818. In the dalit narrative, the battle symbolises the victory over casteism as the British Army comprising a large contingent of dalit Mahar soldiers defeated the Brahmin forces of the Peshwa.

Ramdas Athawale, the union minister of state for social justice, visited the spot and offered his tributes. He announced that the Bhima-Koregaon region would soon be given pilgrimage status. “The state government has made a plan of Rs 63 crore for the development of this region. It will be increased to Rs 100 crore and the Centre will extend every possible support for this,” he added.

Sandip Pakhale, additional superintendent of police, Pune Rural Police confirmed that the number of devotees who turned up this year was much higher than that of last year. He said, “Till now,  5.5-6 lakh people have visited the spot and it is higher than last year’s figures. Last year we couldn’t count the number as riots broke out. And many went back without visiting the victory pillar after they heard about the riots.”

The presence of political parties was limited to dalit parties like various factions of the Republic party. Only Raju Waghmare of the Congress was seen paying homage to the pillar. Bhimrao Ambedkar, Prakash Ambedkar, Jogendra Kawade were among those who visited the pillar.

After last year’s riots, the Pune police had deployed heavy security with over 6,000 police personnel and over 1.000 volunteers. The police has been preparing for the event for the last three months. They had taken preventive action and barred many, including Milind Ekbote, Kabir Kala Manch activists from entering the area.

The administration made available facilities like drinking water, toilets, parking, ambulances and helpdesks expecting a crowd of over seven lakh on Tuesday.