Unpaid traffic fines to be up by 5 times, pay now 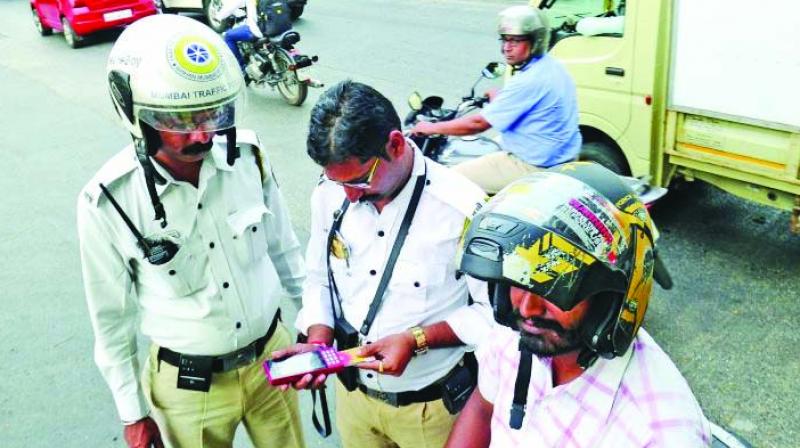 File picture of the traffic police on duty.

Mumbai: In a bid to deter traffic violations, the Mumbai traffic police and regional transport office (RTO) will increase fines by five fold and in some cases 10-fold from February 15. More than 46 lakh traffic have not paid their fine to the traffic department.

The unpaid penalty is approximately Rs 27 crore. Despite various attempts made by the traffic department, the violators have not coughed the fines. Till date only 11 lakh traffic offenders have paid up fines to the tune of Rs 8 crore.

Amitesh Kumar, joint commissioner of police (traffic) said, “The recovery rate has been consistently low. We have used various tactics to recover fines. One such measure that will be introduced is the increase in the fines charged for various traffic violations. These fines will be doubled or increased by five to 10-fold.”

Mr Kumar added, “The aim is to make people aware of the money they will have to pay when they violate traffic rules. We hope this will decrease the rate of traffic violations committed on a daily basis.”

Traffic violations like driving without licence, over speeding, drinking and driving, driving without seatbelt, riding without helmet and talking on the phone will see a generous rise in the fines levied on the motorists and riders.

The city has about 5,200 Closed-Circuit Television (CCTV) cameras installed. The images are sent as a video grab which clearly show the traffic violation committed by the person at a time mentioned with the image attached in the mail or MTP (Mumbai traffic police) mobile application.

Process of getting an e-challan

When a vehicle violates a traffic rule, a text message is sent to the registered mobile number.
After logging in the MTP application, a screen grab while violating the rule is sent along with the fine amount.
When the e-challan is not paid, a constable is sent at the registered address.
If still the fine is not paid, and the motorist is caught in a routine check up, the pending amount is recovered from him/her, if not paid, the licence is impounded.

The old practice of impounding licences was started again.
E-challans were sent via post to the registered address of the traffic violators.
Constables were sent at the residences of traffic violators to collect the fines.
Motorists were stopped at various checkpoints, and if their vehicle was sent an e-challan, the amount was recovered from them.