One and a half crore farmers have less than two hectares of land in Maharashtra. 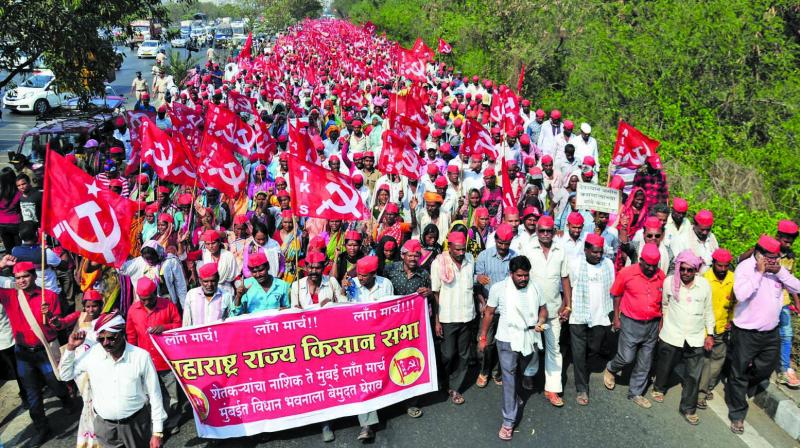 The government announced transfer of Rs 6,000 per year to 12 crore farmers holding cultivable land up to two hectares directly into their bank accounts from this year.

Mumbai: The Bharatiya Janata Party-led  government’s “populist” budget, which sets aside Rs 6,000 as annual assured income for farmers, has failed to lift the spirits of Maharashtra’s ploughmen.

Ajit Navale, a farmer leader and state general secretary of the All India Kisan Sabha, which had organised a 180-km march from Nashik to Mumbai last year, said that the Centre has lost the last chance to fulfil farmers’ demands and that a budgetary provision had not been made for increasing the income of farmers and creation of purchase centres.

Mr Navale said that farmers were feeling disappointed as the government did not announce a complete loan waiver in the budget.

Criticising the government for providing a monthly minimum assured income of Rs 500, Mr Navale said the government was making a mockery of farmers. “On an average, Rs 3.33 would be given to each person in a family of five per day. It is very painful,” he said.

The farmer leader also noted that the Central government announced benefits only for farmers who own less than two hectares or five acres of land. “This is unjust to the farmers of Vidarbha who have more than five acres of non-irrigated land, which see low yields. In such a scenario, the government has made these farmers ineligible,” Mr Navale said.

The leader also pointed out that the government had given something to landholders, but overlooked labourers and cultivators without farms. This is also unjust, he said.

Pramod Jadhav, a farmer from Khandala in Satara district, who was part of the farmer morcha, said, “We won’t believe the announcements until we receive money in our account. We have been seeing the government make promises for many years but we have never received any benefits.”

Close to 1.5 crore farmers in the state will benefit from the National Democratic Alliance government’s interim budget, a senior official said. “One and a half crore farmers have less than two hectares of land in the state. These farmers will be given the benefit of the Pradhan Mantri Kisan Samman Nidhi (PM-KISAN) which was announced in the budget,” he stated.

Raghunath Dada Patil, president of the Shetkari Sanghatana, expressed unhappiness with the budget. “We want the go-vernment to give the mi-nimum support price to farmers and allow their produce to be sold in the free market,” he said.

Lack of detailed plan irks greens
The budget allocation for the ministry of environment, forest and climate change has been increased by 20 per cent as compared to 2018, but environmentalists have stated that the Union Budget fails to address the detailed action plan for conservation of the environment.

The allocation for the Union environment mi-nistry for 2019 is Rs 3,17-5.72 crore as compared to Rs 2,675.42 in 2018. There have been increa-ses in the budget for environmental knowledge and capacity building, National Missio-n for Green India, the integrated development of wildlife habitats and the national river conservation programme, but the increase is minimal, Mumbai-based environmentalists said.

The budget also shows that the increase in fund allocation for institutions like the Animal Wildlife Board and National Green Tribunal is also minimal at Rs 12 crore and Rs42 crore res-pectively, which is Rs 2 crore more than the last budget.  “The budget all-ocation for Project Tiger and Project Elephant has not changed as compared to last year. There has not been much incr-ease in the conservation of natural resources, w-ith no allocation for coral reefs and mangrov-es. It shows that there is no vision to prevent the destruction of the environment in the first place but only for later da-mage control,” said St-alin Dayanand, project director, Vanashakti.

Stating that fund allocation for KUSUM scheme for renewable energy and for stubble burning find no mention in the budget this time, Sunil Dahiya, senior campaigner, Greenp-eace India, said, “It seems the environment ne-eds better allocation in core areas and the detailed budget has to match up with the vision.”