The third seizure comprised six gold bars from Bunty Ramchandani alias Bharat Kukreja, who had arrived by a domestic carrier from Guwahati. 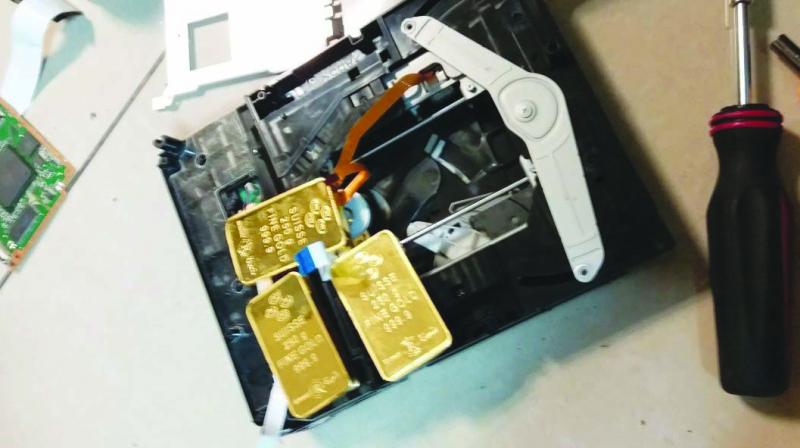 Mumbai: The Mumbai Customs’ Air Intelligence Unit (AIU) conducted three separate raids on Saturday, seizing 1.7kg of ‘gold dust’ with purity of 999 per cent worth around Rs 47.09 lakh. It also seized nine gold bars, weighing around 1.9kg, worth Rs 55.18 lakh in two other cases. Three of the gold bars were recovered from inside a PlayStation 3 console belonging to one of the accused. The AIU has registered three cases in connection with the seizures, as per the provisions of the Customs Act.

In the first incident, officials intercepted Saba Parveen Khan at the international airport after her arrival from Sharjah, upon suspicion. When the luggage was checked thoroughly, the officials found that she had cleverly concealed a brown coloured powder in a container with a sticker of water on it weighing 2.8kg. “When it was thoroughly checked, we found around 1.6kg of ‘gold dust’ worth Rs 47.09 lakh in it. It was concealed inside a plastic pouch, which was kept in a brown coloured cloth belt. This was tied to her abdomen. It has 999 per cent purity and is of 24 carat,” said an AIU
officer.

The officials arrested Khan and one Anwar MT, who had come to receive her. The accused woman’s statement was recorded in which she has shared details pertaining to the smuggling.

In the other incident, the AIU officials intercepted Shahid Aboobaker Kader, upon his arrival from Riyad. The officials searched his baggage and found a PlayStation 3 console. The AIU officials found it to be unusually heavy and opened it to discover three gold bars stuffed inside. The 750-gram bars worth Rs 21.02 lakh were not declared and the gaming system was kept in the check-in baggage, officials said.

The third seizure comprised six gold bars from Bunty Ramchandani alias Bharat Kukreja, who had arrived by a domestic carrier from Guwahati. He was carrying gold cut pieces weighing 1.2kg worth Rs 34.16 lakh. “The pieces were wrapped in a black carbon paper stuffed in his rectum,” an official said.