The rescue operation lasted for almost three hours after which the leopard was tranquilised and taken to Sanjay Gandhi National Park. 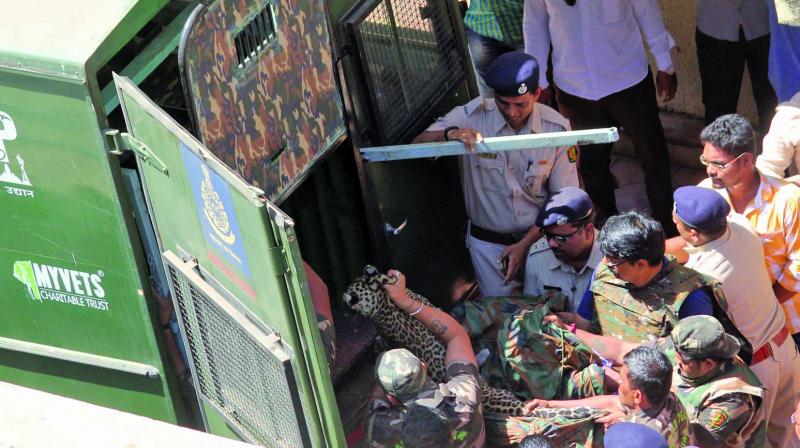 The rescue team rescue the leopard and take it to safety in Marol. (Photo: Mrugesh Bandiwadekar)

Mumbai: The Thane forest department successfully rescued a male sub-adult leopard that had entered a residential society in Marol, Andheri on Monday morning.

Forest officials stated that the leopard appears to have come from Aarey Milk Colony as the area is only 100 metres away from it. The leopard was spotted sleeping below a white car in Woodland Crest Residential Society in Vijay Nagar, Marol in the morning, following which the residents called the forest department for help.

The rescue operation lasted for almost three hours after which the leopard was tranquilised and taken to Sanjay Gandhi National Park (SGNP).

“I saw the leopard resting below my car parked inside the complex around 9.30 am after which I rushed back to my home,” said Pramod Sambatwad.

A team of almost 50 personnel from the Thane forest department and SGNP and an equal number of policemen and officials from the Fire Brigade along with volunteers from NGOs conducted the rescue operation.

The team arrived at the spot around 10.30 am. “Being scared, the leopard ran into the basement of the building where it was hiding. Since it was an open area, we had to make sure that no one enters the area. Some of the team members were controlling the crowd,” said Jitendra Ramgaonkar, deputy conservator of forest, Thane.

According to forest officials, the leopard did not attack or injure any residents there. By noon, the leopard was tranquillised beneath the staircase on the ground floor and it was brought to the rescue centre of the SGNP by 2.30 pm. “The leopard is around one and a half years old and not a fully grown," added Mr Ramgaonkar.

Animal activists stated that there are multiple reasons for movement of the leopard into area.

“One could be due to the ongoing metro work in Aarey Colony since it could be from there. Also, during summers, wild animals get dehydrated so it could have come searching for water,” said Sunish Subramanian, wildlife warden of Mumbai.