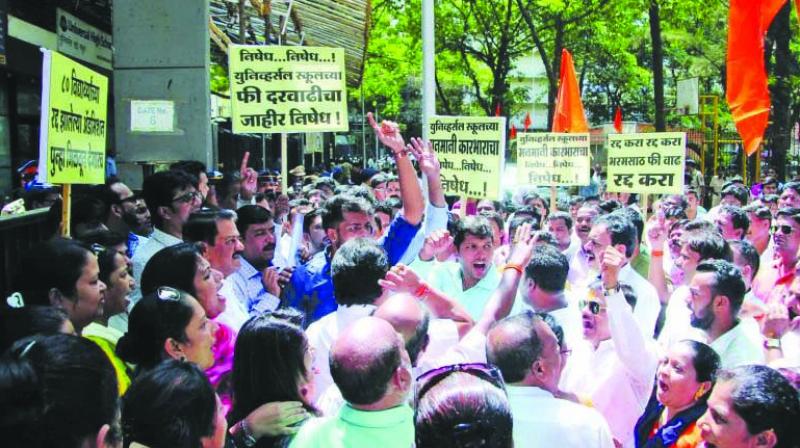 Shiv Sena workers protested against the school management on Wednesday.

Mumbai: The state government has asked Universal School, which has been making headlines over the fee hike issue, to revoke its last week’s decision to de-roll more than 20 students on the grounds that their parents had refused to pay the allegedly illegally hiked fee. The parents were asked to deposit the difference between the earlier and the hiked fee into a separate bank account to be opened by the school, so that the same could be returned to them if the hike was found to have been illegal by the District Fee Regulation Committee (DFRC) in future.

Deputy director, education and member of Mumbai’s DFRC, B. B. Chavan had taken the decision in a hearing conducted on Thursday to resolve the issue between the parents and the school management, at Bal Bhavan in Charni Road. Mr Chavan forwarded the parents’ allegations on the fee hike, from `85,000 to `1 lakh for senior KG, to DFRC that will take a decision after conducting hearings. More than 20 children were expelled for protesting against the allegedly “unjustified” fee hike. Political party Shiv Sena also protested against the school management in front of the School gate Wednesday. But a hearing was kept on Thursday, after the education minister, Vinod Tawde intervened. However, the school management has verbally ensured that the students who were expelled will be re-admitted.

Mr Chavan said, “There were two topics discussed. One was on fee hike and another one was on students de-rolled from the school. On the fee hike issue, we have refereed the points raised to DFRC. The committee will further decide whether the fee hike by the school was legal.” “We will see to it that no kid is expelled from the school, and if he/she is, subsequently, action would be initiated against the school. The minister has already warned the management. Yet, if they go ahead, the NOC will be cancelled,” Mr Chavan added. The decision is still on hold by the FRC committee and has been referred to DFRC.

Talking to The Asian Age, Jesus Lall, chairman of the Universal High School who was present for Thursday’s meeting, said, “There was no application made by the parents to the FRA committee regarding fee hike. However, in the meeting, parents have agreed to deposit the increased fee amount in different account.” When asked, if the fees aren’t paid, he said their wards’ seats will be given to other applicants. Mr Lall said, “We won’t be expelling any kid over this issue. We will consider their readmission on humanitarian grounds.” Currently, parents can either move court or a petition to various educational authorities to hear their complaints.

April 19: Parents take the issue to the Mantralaya.
April 21: Activists, parents go on a hunger strike at Azad Maidan
May 15: Around 25 parents from private schools in Pune and Mumbai meet state education minister Vinod Tawde
May 25:  Parents have alleged that the management of the Universal High School has expelled more than 20 students.
June 1: The Fee Regulatory Committee hears the pleas of the parents and the management of the Universal High School.