Six rescued in fire at I-T office in Scindia House

As many as 16 fire engines were pressed into operation to douse the fire. 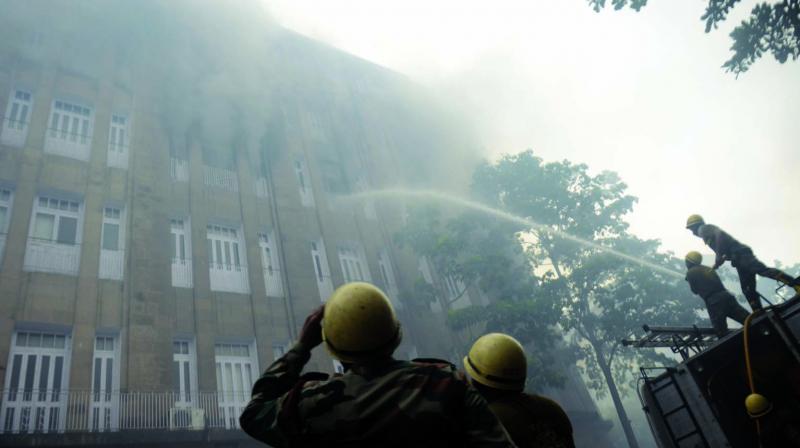 Firefighters try to douse a fire which broke out at Scindia House building on Friday. (Photo: Debasish Dey)

Mumbai: Six people were rescued in a major fire that broke out at the income tax department office at Scindia House, Ballard Pier in south Mumbai on Friday evening. The fire was brought under control in six hours, but the cooling operations went on till late in the night.

According to fire officials, the fire erupted in the income tax office, which is situated on the third floor of Scindia House, at about 4.30 pm. As many as 16 fire engines were pressed into operation to douse the fire.

Six people, who were trapped in the building, were rescued by firemen. They suffered suffocation problems and were rushed to St George Hospital for treatment. Five of them could be identified as Ganesh Solanki (46),  Nilesh Kulkarni (40), Vinod Dube (40), Ajit Kadam (35) and Ramesh Dupare (50). One fireman - Jagdish Bachal - also suffered injuries during the fire fighting operation.

“The cause of the fire is not known yet and will be found out only after detailed investigation,” a fire brigade official said. “But it started from the canteen of the income tax office. Since there was no adequate ventilation. Hence it spread rapidly to upper floors,” he added.

The Scindia House building also houses the office of the Debt Recovery Tribunal.