Intense rainfall occurred in the city on the first day of July with heavy rainfall in Malad at 301.40 mm till evening hours. 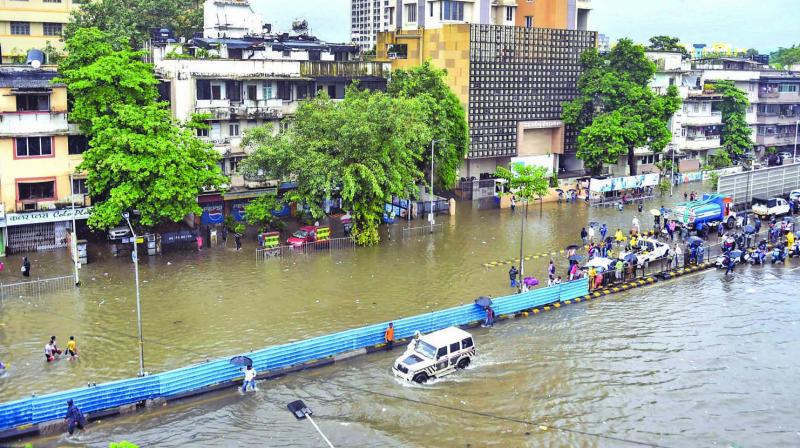 Vehicles move slowly as pedestrians walk through a waterlogged street after heavy monsoon rain in Mumbai on Monday. (Photo: PTI)

Mumbai: In the last two days, Mumbai received around 540 mm rainfall making it the highest downpour in a two-day period in a decade. Since the night of June 30, Mumbai has been witnessing heavy rains incessantly, which continued throughout the next day leading to flooding and affecting normal life in the financial capital.

Intense rainfall occurred in the city on the first day of July with heavy rainfall in Malad at 301.40 mm till evening hours. This was followed by Goregaon (215mm) and Kandivali (145mm), Powai (134mm), Bhandup (115mm) declared the Indian Meteorological Department (IMD).

The weathermen have stated that the entire north Konkan belt has been affected by weather system with areas like Dahanu recording 298.6 mm of rainfall in 24 hours.

The IMD has warned of extremely heavy rainfall in adjoining Thane and Palghar areas on July 2, July 4 and July 5 along with heavy spells in Mumbai during the next 48 hours.

Commissioner of brihanmumbai municipal corporation, Praveen Pardeshi, blamed the climate change and geographic phenomena for excessive rains in Mumbai. “This time, the rainfall that occurred in two days was equal to a month’s lot. Also over the last 50 years, the built up area of the island city has increased significantly and the proportion of water percolating area has reduced,” he said.

Monorail services were also hit due to heavy rainfall on Monday. Flight operations to and from Mumbai International Airport Limited were delayed by minimum of 30 minutes due to low visibility, according to an official from MIAL.

Severe waterlogging was witnessed in areas like Wadala, Sion, Parel, Mulund, Hindmata among others where children were seen playing in a puddle of accumulated water during noon.  Long traffic jams were experienced in Powai, Kurla and parts of western express highway, which was augmented by potholes.