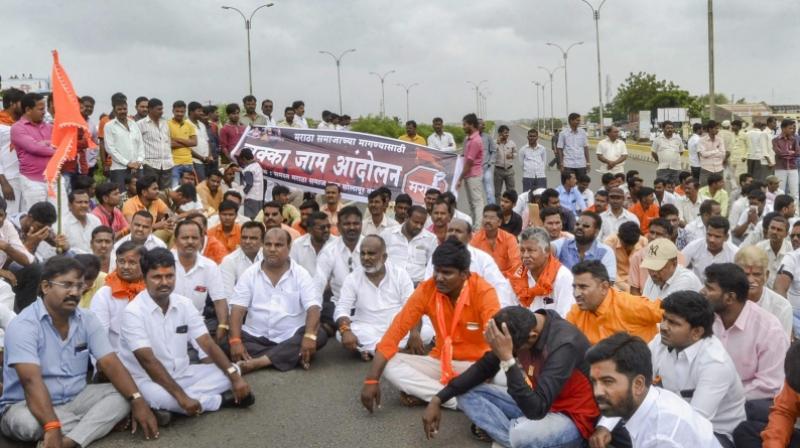 Maratha Kranti Morcha activists block the Pune-Solapur highway during a protest demanding for reservations in jobs and education in Solapur Maharashtra on Wednesday Aug 1 2018. (Photo: PTI)

Mumbai: Maratha activists held 'Jail Bharo (fill the jails)' protested at various places in Maharashtra on Wednesday, demanding immediate introduction of reservations in jobs and education for the community.

In Mumbai and elsewhere, at least 335 persons were detained during the day.

They were released later.

No violence was reported from any place, police said.

They were released later, a police official said.

Rail and road traffic in the city was not affected by the protest.

Police had made adequate security arrangements in view of the agitation, said the officer.

"We have lost confidence in Chief Minister Devendra Fadnavis. His assurances of offering reservation are hollow," Kedar Shinde, a protester at Azad Maidan, said.

Agitators also staged a demonstration outside the residence of Labour Minister Sambhaji Patil-Nilangekar in Latur district.

Farmers in Hingoli district in the Marathwada region, which has witnessed most of the aggressive protests in the last 10 days, organised a bullock-cart march to demand quota for the community.

At least 65 protesters were detained in Pune district, a rural police official said.

Pro-quota agitators also organised a rally at Junnar in the district, he added.

In Madha in Solapur district, at least 50 protesters were detained.

Eleven protesters were detained at Pandharpur when they locked the gate of the Tehsildar office under a "Tala-thoko" agitation.

Police took agitators in custody after opening the gate.

Over 150 protesters were detained at Malegaon in Nashik district and 25 at Ambejogai in Beed district.

In every case, protesters were briefly detained under the Maharashtra Police Act and were let off after being "reprimand", police said.

The politically influential Maratha community constitutes 30 per cent of the state's 12 crore population.

The quota agitation had turned violent in the last 10 days.

The community's demands include 50 per cent reservation in jobs and education, implementation of the capital punishment given to accused in the Kopardi rape case and amendment of the SC/ST (Prevention of Atrocities) Act to prevent its misuse.

So far, six people have committed suicide in the state during the ongoing agitation.

Eight persons tried to set themselves on fire in Latur district during a protest on Wednesday, but police foiled the attempt.