According to the police, Mohseen’s 17-year-old friend was also performing stunts but the constables couldn’t shoot a video of him in the act. 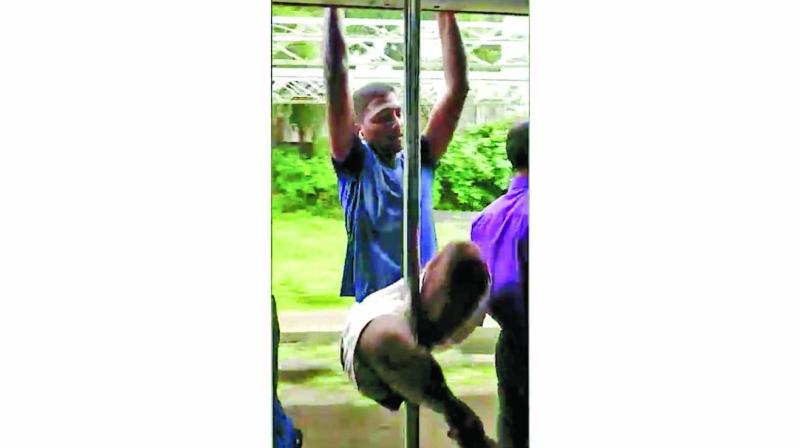 Mumbai: The Wadala Government Railway Police (GRP) on Thursday arrested two youngsters for performing stunts on a Harbour local train. The boys were caught red-handed by two GRP constables who were on their way to work from Chembur to Wadala. One of the boys was  minor therefore he was sent to an observation home.

One of the constables shot a video on his mobile phone, which shows a 19-year-old, later identified as Mohammad Mohseen, performing stunts in the running train. Mohseen is seen sliding along the vertical pole at the compartment’s entrance. He could be seen jumping at the door, sliding through a pole installed at the door and trying to touch objects placed outside the train along the tracks.

According to the police, Mohseen’s 17-year-old friend was also performing stunts but the constables couldn’t shoot a video of him in the act.

When the train reached Wadala station, constables forced them to alight on platform and youths were taken to the GRP chowkie.

After doing a preliminary investigation police found that the boys were travelling without tickets.

“One of the boys lives in Govandi and the other in Colaba. We are informing their parents and summoning them to the station. Such stunts are life-threatening,” said a senior police inspector of Wadala GRP.

The boys have been booked under relevant provisions of the Indian Penal Code and Indian Railways Act. Mohseen will be produced before a railway court.

This is not the first incident where police have taken action against such stunt boys. Back in June, two young boys were taken into police custody for performing hair-raising stunts in a local train.