5 activists were arrested on June 6 over Bhima-Koregaon riots. 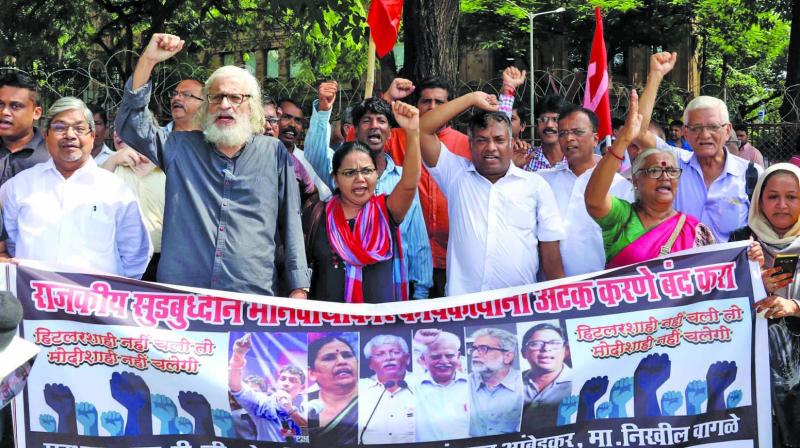 Pune: The Pune police on Saturday sought a 90-day extension to file the char-gesheet against the five activists — Shoma Sen, Surendra Gadling, Mahesh Raut, Rona Wilson and Sudhir Dhawale — who were arrested on June 6 over the Bhima-Koregaon riots.

Ninety days will have passed from the day of the activists’ arrest on September 3, and if the chargesheet is not submitted within this duration, the accused has the right to be released on bail.

Citing that it had voluminous data, seized documents had to be probed and permission was req-uired from the government to file the charg-esheet, the Pune police sought more time to file the chargesheet.

The defence will argue its case on Sunday.

Public prosecutor Ujjwala Pawar stated before district and sessions judge K.D. Vadane of Pune district court, “The investigation into communication between the accused with recently arrested accused and others is yet to be completed. We came to know that Raut had taken a few students from Tata Institute of Social Sciences to forest area for training and want to probe this further. Our investigation into their social media accounts and email ID is in progress.”

All accused are alleged to be members of the banned Communist Party of India (Maoist). The police has seized numerous electronic devices such as pen drives and hard disks, which were sent to a forensic laboratory in Mumbai.

“Information from the lab is yet to arrive. We need to find if they received funds to carry out unlawful activities. We also came to know that they were in contact with other banned organisations in Mumbai, Delhi, Nagpur and Gadchiroli and want more information on this. We are also looking for their bank details and transactions,” said Ms Pawar.

Defence lawyer Rahul Deshmukh said that the police had not given notices to his clients about the extension of judicial custody when they were brought to court. “They were served notices when they were still in the van after reaching the court today morning. The defence lawyers were not even aware of the happening.”

Activist refutes police allegation of naxal link
Human rights activist Anand Teltumbde on Saturday dismissed as outrageous the state police’s claim about his attending a convention in Paris that was alle-gedly funded by Mao-ists.

Teltumbde is among the activists whose homes were raided by the Pune police on Wednesday regarding the suspicion of having links with Maoists. “These are all false allegations to malign and defame me. I don’t know any Maoist leader, and I do not have any relation with this,” Teltumbde told a news agency.

“I keep going abroad for academic conferences. It is all on official invitation and everything is well-documented,” he said.

The raid on the home of Teltumbde who is a Goa Institute of Man-agement professor and dalit writer, was part of multi-city searches carried out by the Pune police in connection with an event held in Pune in December last year.

Five left-wing activists were arrested during the searches and they have been placed under house arrest till Sept-ember 6 as per a Supreme Court direction. Teltumbde is not among them.

On Friday, the Maharashtra police had cited a letter, allegedly written by “Comrade Prakash”, which mentioned arranging funds for a human rights convention atte-nded by “Comrade Anand” in Paris. However, the police did not say when the convention was held. The letter also mentioned allocating Rs 10 lakh annually to organise international seminars on dalit issues, they had said.

Dismissing these charges, Teltumbde said, “I don’t know any Maoist leaders and I have not received any letters. The police should think before levelling allegations. They should see my background and the work I did.”