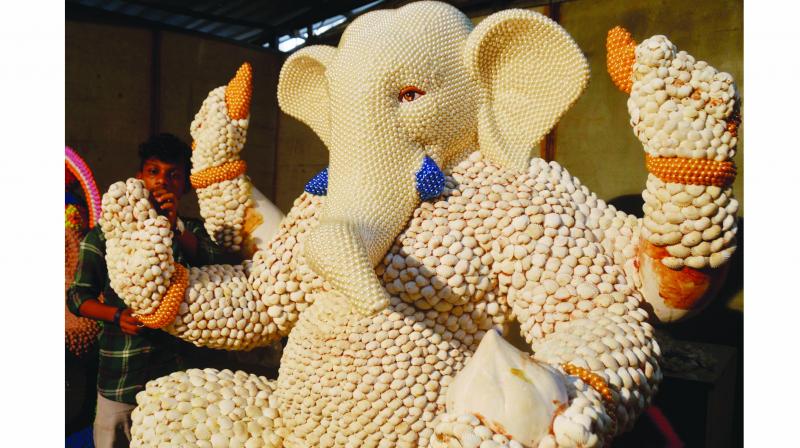 The pearl and seashell Ganpati at Makba Chawl. (Photo: AA)

Mumbai: Mumbai’s favourite god has arrived, and with it begins 10 days of jubilant celebrations in honour of Ganesha – the lord of good beginnings.

Ganeshotsav in Mumbai is, however, nothing without its innumerable ‘Sarva-janik Ganesh Mandals’, which have played a pivotal role in turning the festival into a widely recognised cultural phenomenon of the maximum city.

Themes galore
Several pandals across Mumbai are also worth a ‘dekho’ for their interesting themes and intricate designs.

On the top of the list is the immensely popular ‘Lalbaugcha Raja’, whose theme this year will be Chandarayaan-2’s launch. Interestingly, the vehicle is expected to reach moon between September 6 and 7. The grand idol at the centre, its background shows the Milky Way and planets of the solar system, along with other elements from space.

Two popular mandals, one at Kalachowki and the other in Ganesh Galli, will be recreating famous temples this year. While the former will recreate the Vith-oba temple in Pandharpur, the latter has visualised a grand ‘Ram Mandir’ in Ayodhya. “We are known for recreating temples at our pandal every Ganes-hotsav,” said Aman Dalvi, secretary of the Kalacho-wki Mahaganpati Mandal.

The 10-day festival is also incomplete without several out-of-the-box Ganesha idols that could give many Michaelangelos a run for their money. The Ganpati idol at Makba Chawl is one of them. This year, the organisers have installed a Ganesha made of pearls and seashells!

Giving out a message
Mandals began at the fag end of the 19th Century as a medium to mobilise people against the British. Hence, it comes as no surprise that many continue to spread social messages at their pandals.

The Tejukaya Ganpati Mandal in Lalbaug, for example, has decided to go ‘green’ to highlight the need to protect Mother Nature. It has installed a 22-foot-tall idol made of bamboo sticks, paper mache, water-soluble adhesives and natural colours.

“It took us five months to build it. We have in fact used 800 to 900 newspapers from the vicinity to make the idol,” said Rajan Zad, the idol’s sculptor.

The Chandanwadi Sarvaj-anik Utsav Mandal, which plays host to the popular ‘Chandanwadicha Raja’, has decided to keep the decorations at its pandal simple. Nevertheless, the organisers will be playing a five-minute audio-visual clip stressing on the need for conserving water, cleanliness, and voting.

Some British-era mandals, too, like to keep it traditional and simple.

The Ganesh Mandal at Keshav Chawl, touted to be have been started in 1893, is still going strong and is known for sticking to its traditional roots despite the changing times.

Another popular mandal, located at Kamat Chawl, claims to be the second oldest in Mumbai. Incidentally, it will be celebrating 125 years of its existence. Like the one at Keshav Chawl, this mandal believes in keeping the celebrations simple.

Recession, floods to pay spoilsport?
Many organisers, however, claim that recession has impacted festivities. Moreover, the floods have forced many mandals to cut down on their spending and channelise their funds towards relief efforts.

We have donated Rs 10 lakh. So, this year we will be having simpler decorations at our pandal,” said Vasudev Sawant, whose mandal organises Chinchpoklicha Chintamani without fail every year.

Two infamous dons in Mumbai’s history are to known to have patronised Ganapati mandals. Chhota Rajan, who is currently in jail, continues to organise celebrations at Tilak Nagar in Chembur, while Varadharajan, who died in 1988, once patronised a Matunga mandal.