The Versova and Shivaji Park police also arrested 44 workers of the Congress and MNS in light of the rally organised in support of hawkers. 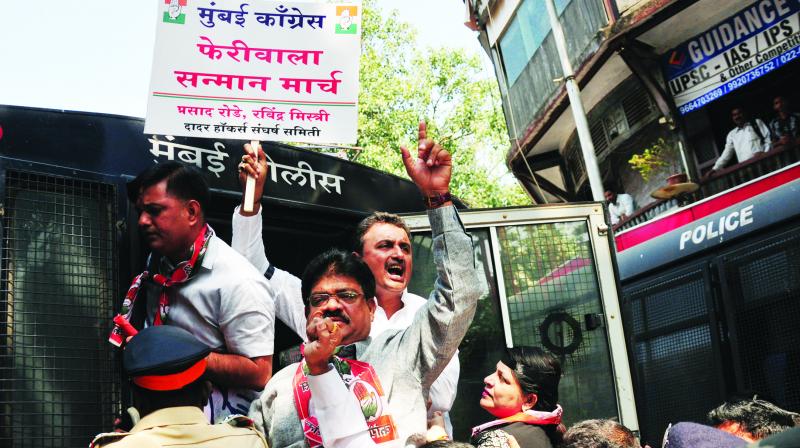 Mumbai: Mumbai congress chief Sanjay Nirupam's show of solidarity with hawkers - involved in a tussle with Maharashtra Navnirman Sena (MNS) which seeks to bar hawking around railway stations - resulted in fisticuffs between workers of the two parties outside a mall near Dadar railway station Wednesday morning.

The scuffle erupted with MNS workers arriving near the mall to disrupt the Congress protest. MNS workers allegedly threw onions and potatoes on Congress workers after which abuses were hurled at each other with the two sides ending up trading blows.

Minutes later, the police arrived to stop the fight and arrest 23 workers, 15 of them belonging to the MNS. According to the police, workers of the rival parties clashed during a march organised by Nirupam in support of hawkers on Wednesday.

The Shivaji Park police arrested 15 MNS workers while eight Congress workers were sent to Dadar police station for protesting and engaging in fights in a public place.

Gangadhar Sonawane, senior police inspector of Shivaji Park police station told The Asian Age, "The 23 accused men have been arrested under relevant sections of the Maharashtra Police Act for rioting. We are interrogating the men and the case is being probed."

"The MNS workers allegedly started hurling onions and potatoes at Congress party workers in a bid to ridicule their protest. However, it soon turned violent once members of the two sides started hitting each other. Congress workers including Rajan Bhosale and Nitin Patil have been arrested," he said.

After the city Congress chief announced that he would address a rally at Dadar in support of hawkers, some 25 MNS workers gathered outside Nirupam's residence in Versova, making it completely impossible for him to leave his home.

The Versova and Shivaji Park police also arrested 44 workers of the Congress and MNS in light of the rally organised in support of hawkers.

The MNS workers gathered outside Nirupam's residence to stop him from stepping out for the protest while the Congress workers came to stop MNS from doing so. This culminated in a scuffle, leading to arrests of members of both parties.