Cyclone Maha likely to intensify into very severe storm during the next 24 hours. 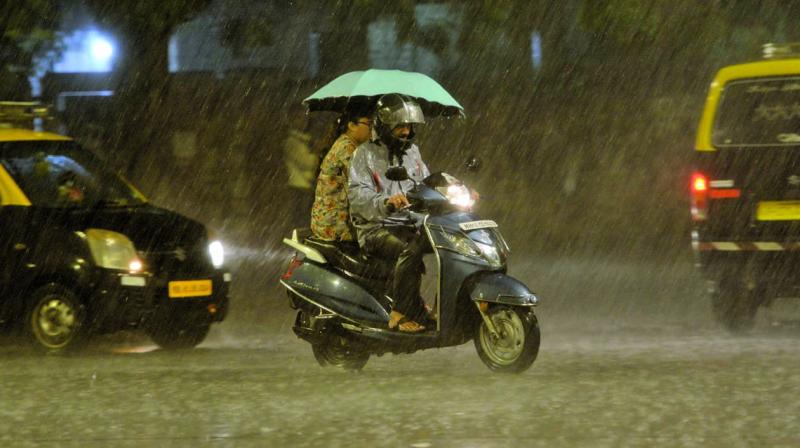 Weathermen have attributed the unusual rains in November to the presence of cyclone Maha over east central Arabian Sea. (Photo: RAJESH JADHAV)

Mumbai: Several Mumbaikars were caught off guard as the city experienced incessant rain on Friday evening. The Indian Meteorological Department (IMD) said unexpected rains were caused by cyclone Maha and also issued predicted cloudy skies in Mumbai city and suburbs for the next 24 hours, while cloudy skies with the possibility of lig-ht rain and thundershowers for the next 48 hours.

Skymet Weather, a private weather forecasting agency stated, “These rains have occurred due to none other than cyclone Maha, which is currently over east central Arabian Sea about 610 km south of Veraval, 590 km northwest of Mangalore and 410 km west of Goa.”

Due to the prevailing rains and cloudy skies, the city’s weather is likely to remain pleasant, while the day temperatures are expected to dip.

On Friday, Maha cyclo-ne intensified into severe cyclonic storm and is centred over east-central Ara-bian Sea near Lakshad-weep Islands, according to IMD. “Cyclone Maha is likely to move in the north-westward direction in the next 24 hours and then west-northwestward during November 2-4. It may intensify into a very severe cyclonic storm during the next 24 hours,” it stated.

There have been four cyclones from the beginning of monsoon this year. First it was cyclone Vayu which formed during the onset of monsoons, cyclone Hikka during the withdrawal phase and then Kyarr last week and now cyclone Maha.