The police resorted to a mild lathi-charge to disperse the protesters, who vandalised auto rickshaws, BEST and private buses. 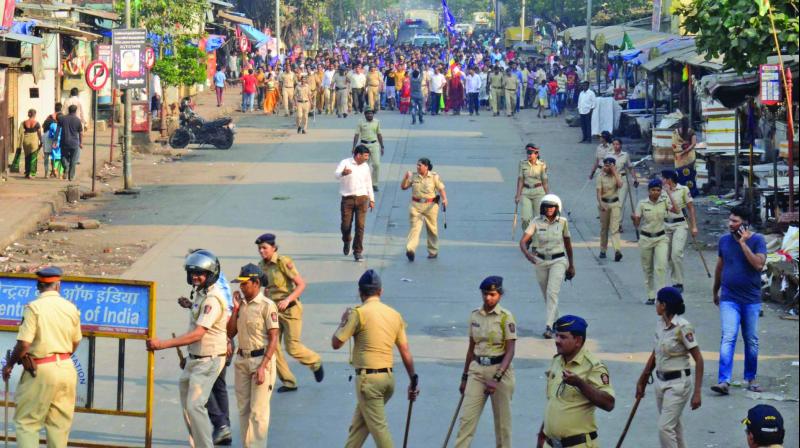 Policemen accompany the Dalits protestors as they stage a protest against the violence in Bhima Koregaon area of Pune, in Mumbai. (Photo: Rajesh Jadhav)

Mumbai: A day after Koregaon, Pune erupted in violence over the 200th anniversary celebrations of the Battle of Koregaon — claiming the life of a Nanded youth — violent protests mushroomed in various parts of the state, including Mumbai.

Angry protesters blocked traffic and halted railway services at numerous parts of the city while shops and business establishments were shut at Chembur, Vikhroli, Mankhurd, Kurla, Dadar and Govandi.

The police resorted to a mild lathi-charge to disperse the protesters, who vandalised auto rickshaws, BEST and private buses.

However, normalcy was restored by late evening, with the police detaining around 100 protesters.

Meanwhile, a 35-year-old Chembur police constable, Deepak Khedekar, sustained severe injuries in his left eye while trying to bring a group of violent protesters in Chembur under control. He has been admitted to the privately-run Zen Hospital at Chembur where he is undergoing surgery. A mob had allegedly attacked him with glass bottles.

Dr Roy Patankar director of the hospital said, "Khedekar was injured with sharp glass pieces. It has damaged his cornea. The eye surgery lasted for more than two hours," he said. He added that assistance commissioner police J.D. More also fractured his left wrist.

DCP Sachin Patil said  that they were analysing the CCTV footage to nab the culprits.

Protesters halted harbour line services at Chembur, Govandi and Kurla due to which the line was shut for a total of five hours, resulting in the cancellation of 84 services and delay of over 300. BEST bus services were hit mainly at 11 locations in and around Govandi, Chembur and Kurla (west). The Eastern Freeway saw disruptions near Govandi and Mankhurd, while Chembur Naka was jam-packed as well.

The protesters marched towards Ambedkar Garden in Chembur, but faced resistance by the police. They then blocked traffic on the roads, including on the Sion- Panvel Highway in the afternoon, which caused a massive traffic jam. Sporadic agitations were seen in Mulund, Ghatkopar, Kurla, Dadar, Chembur, Tilak Nagar and some parts of western Mumbai. The protesters also staged a 'rasta roko' on the streets of Powai where loud sloganeering took place. However the police brought the situation under control within 30 minutes by deploying officers.

In Chembur, the police resorted to minor lathi-charge, as the mob had started pelting stones on private and government buses. Most of the protestors in the area were detained for creating panic. These agitations led to traffic congestion on the Eastern Express Highway at Ramabai Ambedkar Nagar, Cheda Nagar and Kamraj Nagar.

Manish Vaidya, a motorist who was stuck on the Eastern Express Highway, said, "Some flag-waving protesters asked all of us to drive back home. They were telling everyone to return home as there was a 'problem in Mumbai'."

Police tweet
In a bid to contain the spread of rumours during Tuesday's turmoil, the Mumbai police tweeted, "Don't believe in rumours. Traffic on Eastern Expressway was affected due to protests. It's moving now. Traffic at Chembur Naka is still affected. There is nothing to panic.  Verify facts with police officers and men before posting anything on social media. (sic)"