Tyres were burnt in Nanded, Beed, Hingoli, Parbhani and Akola while two state transport buses were damaged in Dhule. 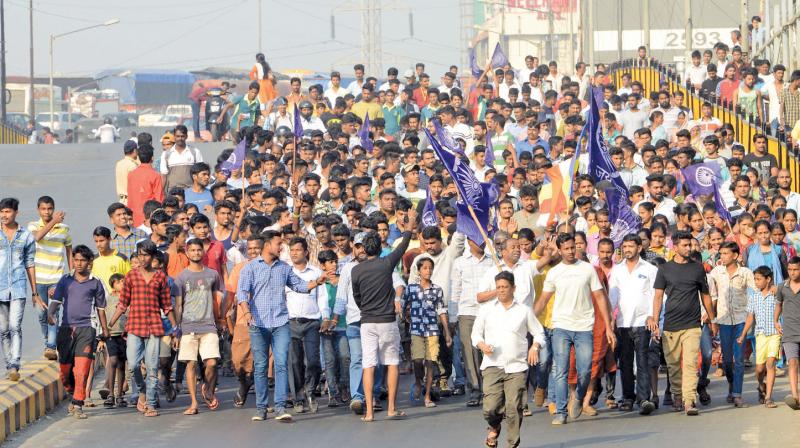 Tuesday saw a mob of youngsters agitating in Aurangabad.

Mumbai: The violence in Pune on Monday during 200th anniversary celebrations of the Bhima-Koregaon battle has sparked aggressive protests across the state.

Tuesday saw a mob of youngsters agitating in Aurangabad however the police managed to control the situation. In Solapur, coolies protested, bringing work at the agricultural produce market committee (APMC) to a grinding halt in addition to impacting normal city life. Tyres were burnt in Nanded, Beed, Hingoli, Parbhani and Akola while two state transport buses were damaged in Dhule. Dalit organisations carried out a rasta roko at Ambedkar Chowk in Pimpri Tuesday morning while a bus was burnt at Pune railway station in the  evening. Buses were burnt and vehicles damaged at Hadapsar, Vishrantwadi, Pimpri and Chandannagar.

Shopkeepers in these areas downed the shutters for some time after news of the violence broke out. Most of the issues occurred in Pimpri-Chinchwad while Pune city was comparatively peaceful. We have deployed two companies of SRPF, QRP and RCP. All DCPs are controlling the situation. We have called meetings of dalit and Maratha organisations, requesting them to maintain law and order.”

Meanwhile, a FIR was lodged against Milind Ekbote of Samasta Hindu Aghadi and Sambhaji Bhide of Shivaji Pratishthan at Pimpri police station under the IPC, Atrocities Act, and Arms Act. The CP Pune said, “There are overall 36 FIRs against Ekbote but most are regarding breach of preventive orders.”