Out of the 24 bikers who were arrested for rash driving on EEH, four were not even wearing helmets. 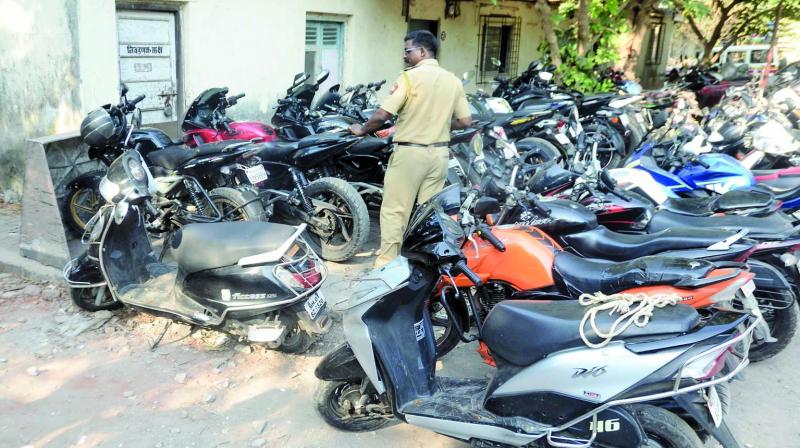 The 24 bikes that were seized from bikers are parked at Pant Nagar police station.

Mumbai: The Pant Nagar police, Ghatkopar arrested 24 bikers and seized their bikes for allegedly speeding and driving rashly on the Eastern Express Highway (EEH) during the night intervening night of Saturday.

The police had deployed a team at Kamaraj Nagar stretch, EEH after receiving several complaints from local residents about bikers creating noise and racing in the night.  Out of the 24 arrested bikers, four were riding bikes without helmets.

The police booked the bikers, all of whom were young men, for rash driving under the relevant sections of the IPC. The Pant Nagar police had put barricades near the Kamraj Nagar police chowky on Saturday night. The Pant Nagar police officials, along with beat marshals and detection officers were on the spot from Saturday night till early Sunday morning. When the cops asked the bikers to slow down, they tried to sped away. Police claim that 15 bikers tried to flee from the spot but were caught by the beat marshals after a chase. The police caught 24 bikes and 41 people, who were over speeding on the EEH and rash driving. The accused were brought to the Pant Nagar police station.

Police inspector Tushar Kale said, “We caught 24 bikers while they were rash driving at Kamraj Nagar on the EEH. They were granted bail on Sunday morning. The pillion riders were not booked. We have seized their bikes and will not hand it over to them without the court’s order.”

The police had booked 24 bikers, while 17 were accompanying the bikers under section 279, 336, 188 and 34 of the Indian Penal Code for rash and negligent driving and disobeying a public servant. The bikers were also booked under relevant sections of the Motor Vehicle Act, 1988.