The police arrested the accused from Panvel and booked them under relevant sections of the Indian Penal Code (IPC) for assault and common intention. 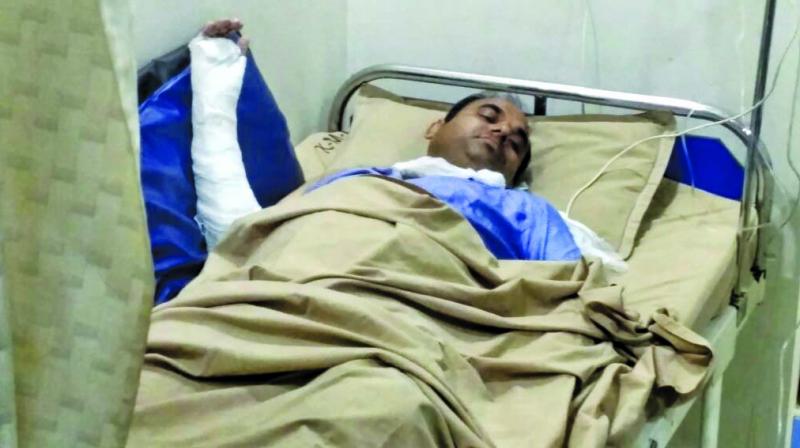 Journalist Sudhir Suryawanshi in hospital after the attack.

Mumbai: Two days after journalist Sudhir Suryawanshi and his friend were assaulted with hockey sticks on Friday, the Kharghar police arrested five persons including his neighbour over the incident. They allegedly targeted the duo over a personal dispute related to the management of a local housing society.

Mr Suryawanshi is the secretary of the residents’ society of Kalpataru, where Mayur Krushna Thakur (30), the journalist’s arrested neighbour, also stays. The police said the trigger for the attack was the animosity between Thakur and Mr Suryawanshi after the latter did not allow the former to put up posters of a political party in the society in the run up to the civic elections in February.

The police arrested the accused from Panvel and booked them under relevant sections of the Indian Penal Code (IPC) for assault and common intention. The accused were presented in court on Sunday and will be remanded in police custody till Tuesday.

A police officer said, “Mayur and the victim Sudhir had had a sour relation for the past two years. Recently they had fought after Sudhir did not allow Mayur to distribute pamphlets belonging to a political party Mayur relative is associated with, ahead of the civic elections. After this incident, Mayur decided to teach a lesson to Sudhir and therefore he attacked him.”

Hemant Nagrale, commissioner of Navi Mumbai police, said, “The two victims are now stable and undergoing treatment at a private hospital in Kharghar. We have arrested five accused including the neighbour of the victim, who was the main person behind the attack. The motive behind the attack was the dispute in the society, which took place a month ago. We are investigating the matter from all angles.”