Sharad Pawar calls for unity among Oppn parties in Maha

His statement is important as it comes after he met Congress vice-president Rahul Gandhi recently over uniting the Opposition across the nation. 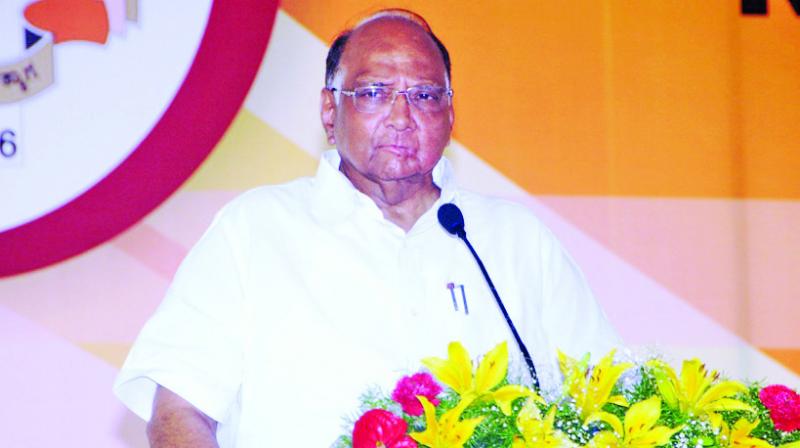 Mumbai: Nationalist Congress Party (NCP) chief Sharad Pawar on Sunday gave a call for ‘Opposition unity’ in Maharashtra. “Division of votes of secular parties has been benefiting the Bharatiya Janata Party (BJP) in state as well as India. The BJP could be defeated if we come together and put up a consolidated fight against it,” said Mr Pawar while addressing his party workers in Kalyan.

His statement is important as it comes after he met Congress vice-president Rahul Gandhi recently over uniting the Opposition across the nation. Also, Opposition parties have been successful causing a stir in the state over the farmer loan waiver issue via their Sangharsh Yatra.

During the meeting, Mr Pawar said, “Though we have lost the elections this time, it is not a big deal to defeat the BJP in the coming elections. We need to consolidate all our forces and we need to take on board all like-minded parties to form an alliance. Our workers need to initiate such moves everywhere.”

“We have seen what happened in Goa and Manipur. The BJP wants to grab power and to do so, it is capable of anything — be it right or wrong. I am worried about social tensions that the BJP is intentionally creating in society. It is trying to vitiate the atmosphere. A secular alliance will strongly oppose such attempts to divide India on the basis of caste, religion or gender,” he said. Meanwhile, Mr Pawar’s has started talks with different Opposition leaders.