Student prevents trees from being axed illegally in SoBo

On seeing two huge trees being chopped down, Akash Sharma, a Nariman Point resident, demanded to see a permission letter. 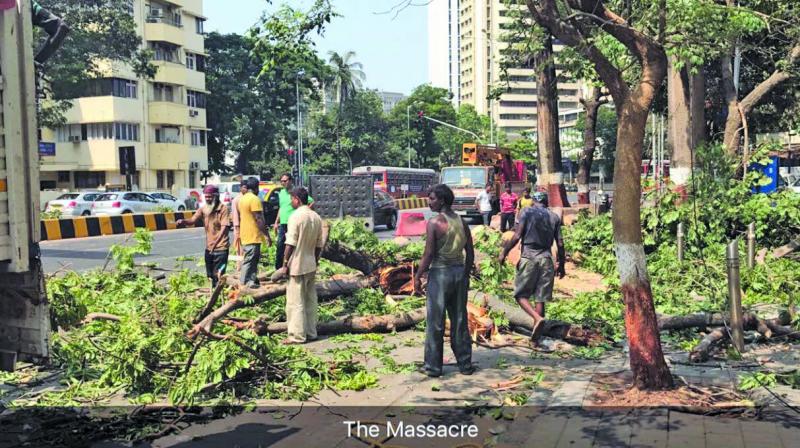 The trees were being cut down near Mantralaya.

Mumbai: A group of south Mumbai residents on Sunday morning prevented the alleged illegal felling of trees after a student, Akash Sharma (24), noticed the activity.

On observing that two huge trees were being chopped down around 10 am near Mantralaya, Mr Sharma, a Nariman Point resident, demanded to see a permission letter.

However, after being stonewalled by the workers, he brought the matter to the attention of locals. Finally, a group of residents got the men to cease their activities by involving the Municipal Corporation of Greater Mumbai.

Mr Sharma, who is associated with the group Save Trees, called up other residents after which a letter was presented to them.

According to the letter, the contractors did not have permission to chop down the trees and it was clearly mentioned in the letter that the trees were only to be trimmed.

Environmentalist Zoru Bathena then shot a detailed complaint message to Byculla Zone I S.P. Gavit, a Brihanmumbai Municipal Corporation (BMC) officer, over WhatsApp Messenger, which asked the authority to immediately stop the felling of the trees.

The residents also called up Mr Gavit, after which the latter contacted the contractor and stopped the work.

Recounting the incident, Mr Sharma said, “I was cycling when I noticed the trees being chopped down. I stopped the men after I found something amiss and asked to see the permission letter they had received to cut the trees.”

Mr Sharma alleged that the contractors were ignoring and stone-walling him since he is a youth. However, when The Asian Age contacted Mr Gavit, he said, “The contractor had taken permissions from the ‘A’ ward as few of its branches were rusted (sic) and had to be chopped off.”