Most importantly, these premium trains will get bio-toilets as part of the makeover. 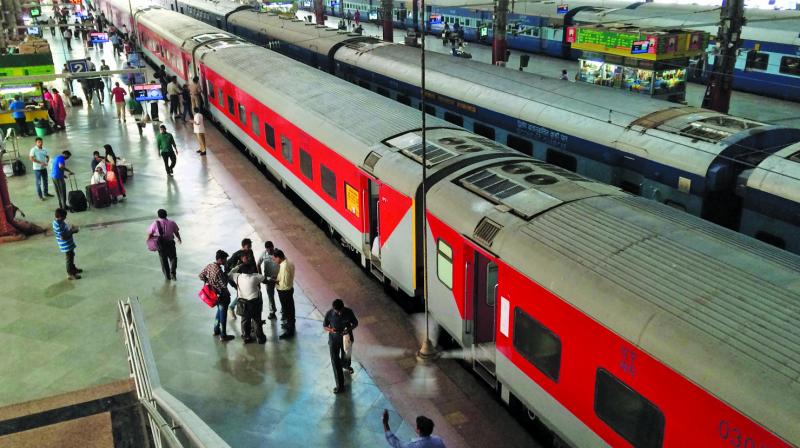 The railways plans to win back the customers it has lost to economic air travel. (Photo: Shripad Naik)

Mumbai: Ten days after introducing India’s fastest and most amenities-rich train Tejas Express, which runs between Mumbai and Goa, the railway is now looking to lend a touch of luxury to three of its popular, premium trains under the brand new Swarn (Gold) scheme. As part of the scheme, the railway board has asked western railway (WR) to give a makeover to Rajdhani Express (Mumbai-Delhi), Shatabdi (Mumbai-Ahmedabad), and August Kranti (Mumbai-Delhi) with an allocation of Rs 50 lakh each for upgradation of these trains.

The railway board has communicated its decision to the commercial department and Rs 50 lakh has been allocated to each of these trains to make them even more attractive to commuters. Coming ten days after the luxury train Tejas Express was flagged off from CST, the move, according to officials, is part of railway’s plan to win back the customers it has lost to economic air travel. Most importantly, these premium trains will get bio-toilets as part of the makeover.

The vision behind the initiative is that Mumbaikars’ travel will be complete with facilities such as varied food options onboard, seats/berths on par with those seen in uber luxury trains such as Maharaja Express.

A railway official said, “The travel time of almost 16 hours will be of such quality that commuters will not mind taking the train as they can relax on the way and reach Delhi and Ahmedabad in a rejuvenated state.”

The official added that the target audience was families who could not afford exorbitant prices of food onboard flights and at airports. “Children and a few adults prefer trains anyway, as they catch up on sleep while travelling in trains. On the other hand, kids demand food and a lot of the times, people have to pay through their noses for the same,” the official said.

The railway board has been contemplating the idea for a while but official communication was sent to railway officials on Friday. WR chief public relations officer Ravindra Bhakar said, “The scheme is big for us as it will mean that people will travel better and the quality of travel will improve in trains overall.”

He added that money would also be spent in knick-knacks that would make train travel more enjoyable. “The idea is that we improve the way trains are perceived i.e. as dirty and troublesome.”