Within a fortnight of its arrival, more than 20 people have already lost their lives to drowning. 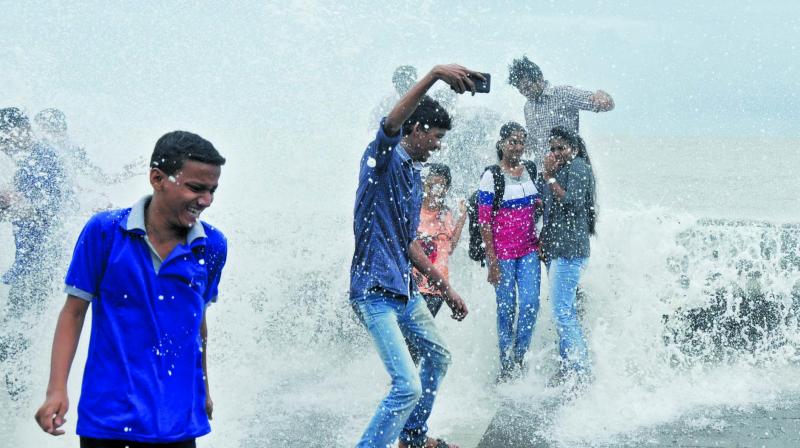 Police teams have already been deployed at places like Marine Drive, Bandra and Juhu along with a few other city beaches that witness heavy crowds. (Photo: Debasish Dey)

Mumbai: The monsoon, which arrived in the city by mid-June, bringing much-needed relief for Mumbaikars, has also brought in its set of woes.

Within a fortnight of its arrival, more than 20 people have already lost their lives to drowning.

In the most recent incident, a 30-year-old Bhayandar resident, Kunal Lohiya drowned on Sunday, when he had gone for a picnic with 30 other people at a farmhouse in Gorai. The Gorai police station has registered an Accidental Death Report in the case.

To curb the causalities linked to drowning incidents, Mumbai police has started deploying personnel along with civic lifeguards and officers from the National Disaster Response Force (NDRF) team on weekends at the beaches across the city.

Police teams have already been deployed at places like Marine Drive, Bandra and Juhu along with a few other city beaches that witness heavy crowds.

However, these police personnel, are only armed with a lathi (cane) to shoo away the people who go too close to the water bodies. Deployed from 8 am in the morning till late night, these officers take continuous rounds during high tide to ensure people’s safety.

Deputy Commissioner of Police, Zone 1, Manoj Kumar Sharma said, “We have come up with a strategy of deploying police personnel at sea-fronts, who will keep away individuals from going on the promenade to click selfies, which lead to loss of balance and falling into the sea.”

“We are requesting people to keep away from the sea-fronts during high tides and immediately inform the officials patrolling the area when such a mishap occurs. Repeated public service announcements to be wary of the powerful waves and stay away from the promenade have fallen on deaf ears,” DCP Sharma added.