Since Monday, the city witnessed incessant rains with many areas recording more than 300 mm rains till 8:30 am on Tuesday. 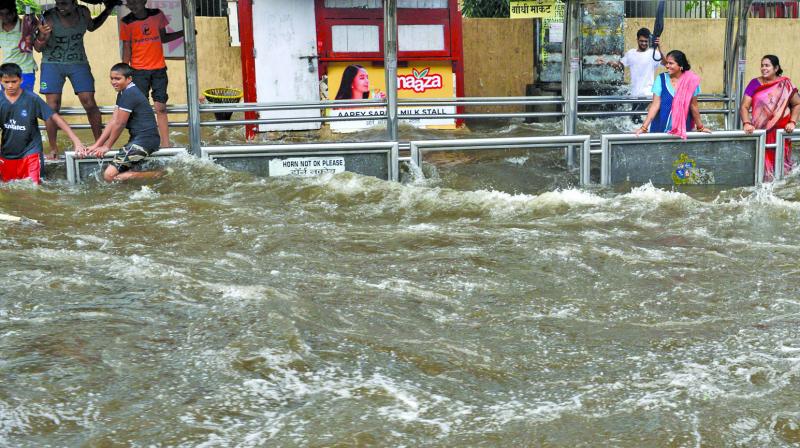 Waterlogging at a bus stop in King Circle on Tuesday. (Photo: RAJESH JADHAV)

Mumbai: Mumbai came to a halt on Tuesday as the city recorded the highest 24-hour period rainfall for July in a decade with Santacruz observatory recording 375.2 mm. The Indian Meteorological Department (IMD) has claimed the downpour as the second highest rainfall in the past 45 years.

The IMD has issued a heavy rain warning for today in Mumbai. However, it stated that the intensity is likely to reduce, as the thunderclouds are gradually moving away from the city region. Meanwhile, areas like Palghar and Raigad are expected to witness extremely heavy rainfall on Wednesday. Thane, Sindhudurg and Ratnagiri is likely to experience heavy rainfall at few places.

“The entire North Konkan belt witnessed vigorous monsoon, including Mumbai with heavy to very heavy rainfall over most places and extremely heavy rainfalls at a few places. The intensity of the rainfall is likely to decrease during next 24 hours,” said K.S. Hosalikar, deputy director general of Meteorology, IMD, Mumbai.

Weathermen have raised concerns over possible flooding as the high tide is predicted to increase upto 4.69 m at 12:35 pm on Wednesday.  Heavy rains is expected to continue till July 5, according to Skymet Weather. “One or two intense spells can’t be ruled out until today afternoon. Intensity will increase thereafter once again,” said Mahesh Palawat, VP, Meteorology and Climate Change, Skymet Weather.