The reward has been announced on any information on Sanatan Sanstha activists Vinay Pawar and Sarang Akolkar who are on the run. 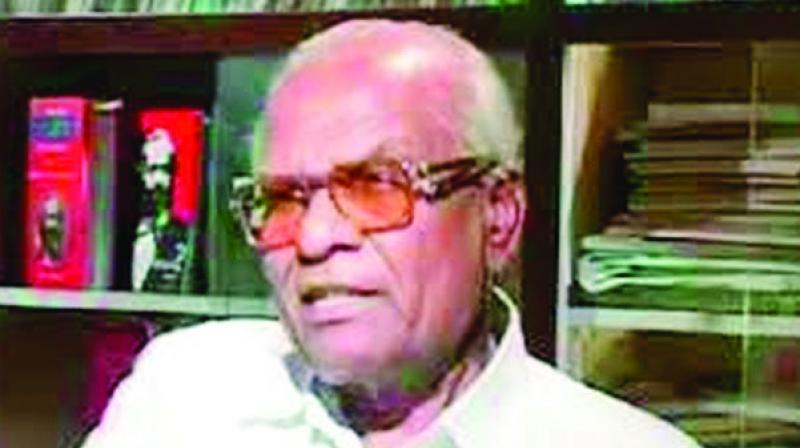 Mumbai: In a bid to track down two of the main accused in Kolhapur CPI leader Govind Pansare’s murder case of February 2015, the Maharashtra government has announced a reward of Rs 10 lakh each  on the fugitive accused. The reward has been announced on any information on Sanatan Sanstha activists Vinay Pawar and Sarang Akolkar who are on the run.

Pansare and his wife Uma were attacked by two bike-borne shooters on February 2, 2015 when the couple was returning from a morning walk. The attackers came close to them and after pushing Uma, fired on Pansare from close range. The shots proved fatal. Pansare was shifted to Breach Candy hospital in Mumbai, where he died on February 20, 2015.

Suhail Sharma, additional superintendent of police (Kolhapur) said, “A chargesheet has been filed in the case against the arrested accused, which also mentions details of the alleged roles of the wanted accused (Pawar and Akolkar). The duo (Pawar and Akolkar) are yet to be apprehended and hence the reward has been announced.”

When asked if the two accused were tracked even once since the murder and if they are still holed up in India or have fled the country, Mr Sharma said, “I cannot comment anything on that.”

The police had sent a proposal to the state government seeking a reward on Pawar, a native of Satara and Akolkar, who hails from Pune. The due were also earlier named as accused in the Margao blast case of 2009. The state cleared the proposal.

Following Pansare’s death, a Special Investigation Team (SIT) was formed to investigate the murder and the case was later transferred to the Central Bureau of Investigation (CBI). The CBI made vital arrests in the case, of two right-wingers attached to Sanatan Sanstha organisation. On September 16, 2015, Samir Gaikwad, a resident of Sangli, was arrested in the case.

Subsequently the investigators learnt about involvement of three others including Akolkar and Pawar.

The officials arrested Dr Virendra Tawde, attached with Hindu Janjagruti Samiti of Sanatan Sanstha for his role in the case. The police has filed chargesheet against both Gaikwad and Tawde. The Kolhapur sessions court also issued fresh warrants against the fugitive duo on July 13, 2017.

Roles Of The Fugitive Duo
Vinay Pawar and Sarang Akolkar, who are absconding, were named in the SIT’s chargesheet in the February 2015 murder of Govind Pansare. The duo was accused of hatching the conspiracy with Dr Virendra Tawde to kill Pansare.  Tawde was earlier named an accused in the cases related to the murders of Pansare and rationalist Dr Narendra Dabholkar. The SIT had alleged that Akolkar was one of the two men who had shot at Pansare. Pawar was found to have been present at the spot a day before the murder and also hours before the rounds were fired, which pointed towards him conducting reconnaissance and tipping off the shooters on the Pansare couple’s location.