Chandrakant Shetty (40) was declared brought dead by the hospital. 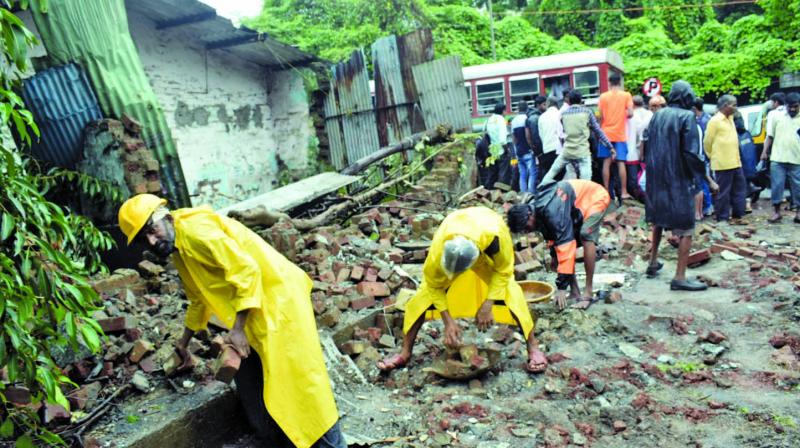 The wall of a house caved in at around 12.15 pm at Chandivali farm. (Photo: MRUGESH BANDIWADEKAR)

Mumbai: Two wall collapse incidents were reported in the city on Friday. In Chandivali, the compound wall of a Mhada building came crashing down, killing a person and injuring two.

The incident took place at Chandivali Farm, Sakinaka around 12.15 pm in which three people were trapped under the debris. The victims were rescued and admitted to the Rajwadi Hospital. However, Chandrakant Shetty (40) was declared brought dead by the hospital while rest two suffered minor injures.

Reportedly, The wall came down trapping them under the debris when the three pedestrians were waiting along the compound wall on the roadside as it was raining heavily.

In another incident, compound wall of a house collapsed at Bhagwandas wadi in Prabhadevi. A team of Mumbai Fire Brigade immediately reached the spot and safely rescued two women trapped under the debris. The residents however, alleged that the construction-taking place nearby was a threat to their residnece and they had also informed the local police and the BMC regarding the danger.

On Friday, five minor incidents of wall collapse were reported due to heavy rainfall. While, across the city 29 tree falls were also reported. However, no one was injured in these incidents.