Thackeray said that no flags and party symbol of any party would be used during the protest march. 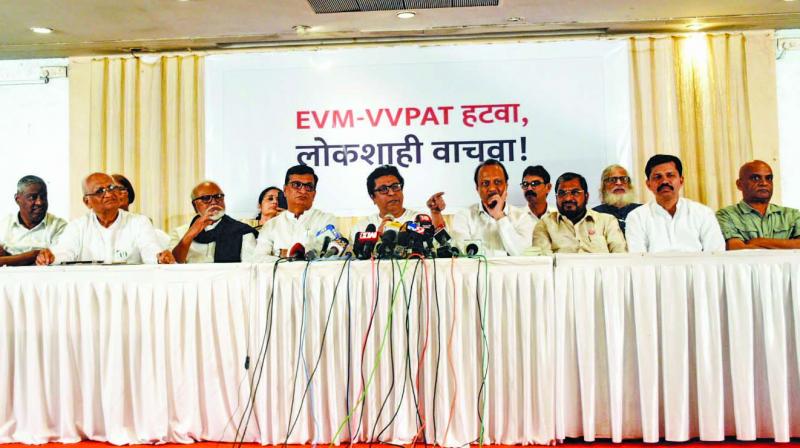 MNS chief Raj Thackeray seemed unperturbed by reports of a possible Enforcement Directorate probe against him. He said that such reports did not bother him. Mr Thackeray added that he had not recieved any such intimation, claiming only newspapers have been reporting on the issue so far.

Mumbai: All major Opposition parties in Maharashtra have joined hands against Electronic Voting Machines (EVMs). Under the stewardship of MNS chief Raj Thackeray, the Opposition, including the Congress and the Nationalist Congress Party (NCP),  will stage a protest march against EVMs on August 21.

In a joint press conference organised at MIG Club on Friday, the Opposition announced the launch of ‘EVM Hatao, Lokashahi Bachao’ (‘Scrap EVM, Save Democracy’) movement. Speaking at the press conference, Mr Thackeray announced that all parties would carry out a door-to-door campaign as well as a signature campaign against EVMs.

After seeking support from voters, all parties will hit the streets on August 21. All forms will be submitted to the State Election Commission of Maharashtra (SECM), the Opposition said.

Reiterating that EVMs and VVPATs would have to be scrapped to save democracy, Mr. Thackeray said that no flags and party symbol of any party would be used during the protest march.

“We do not have any faith in the Election Commission of India in this regard. My meeting with the chief election commissioner was just a formality. He could not answer any of my questions during the meeting,” the MNS chief said.

Arguing that advanced countries like Japan and the United States too do not use EVMs, senior NCP leader Chhagan Bhujbal, while endorsing the protest, questioned the logic of persisting with EVMs. Former deputy chief minister and senior NCP leader Ajit Pawar said, “There are doubts over the EVMs and VVPAT in the minds of the people. Election should be conducted through ballot paper. This is not just our demand but also of the people of Maharashtra.”

Meanwhile, state Congress president Balasaheb Thorat urged people to join the protests and added that a proposal against the use of EVMs in Gram Panchayat election should be passed on August 15.