Meanwhile, political observers are of the view that this newly-minted solidarity between the two communities could change state politics. 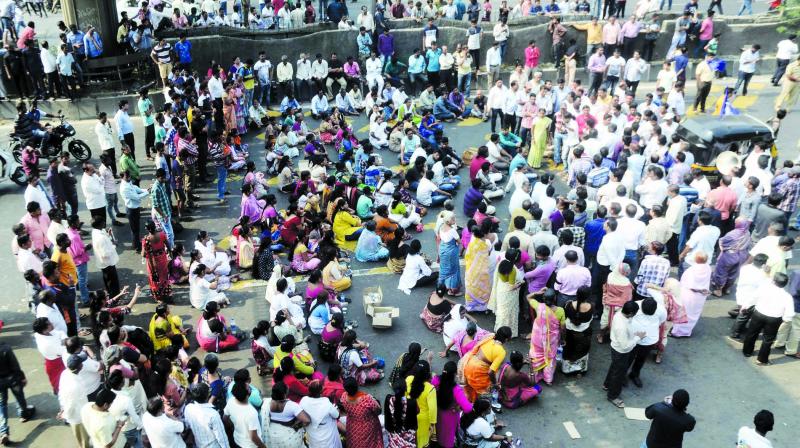 Mumbai: The newly-forged unity between dalit and Maratha community groups - as seen in Wednesday’s state-wide protest over violence related to the 200th anniversary of the Bhima-Koregaon battle – could alter the political equation in the state.

The rift between the two communities following the July 2016 Kopardi rape case and subsequent Maratha marches, seems to have been bridged during Wednesday’s protest over the violence in Pune on Monday during the 200th anniversary of the battle.

Rajendra Kondhare of Maratha Kranti Morcha on Wednesday said, “The government should have taken precautions before the anniversary celebrations. It should have avoided both sides coming face to face. But there is reason to believe that the government machinery purposely avoided doing so.”

Just a year ago around the time of the Maratha marches and the Kopardi rape case, relations between the two communities took a turn for the worse. However, in the last two months, Prakash Ambedkar took the initiative of constituting an umbrella body “Elgar Parishad” comprising over 250 small state organisations, Sambhaji Brigade included. The body has now decided to hold rallies across the state on the “Save Constitution” issue.

Mr Ambedkar said, “We are fighting to save the constitution. All communities who feel threatened by the BJP’s politics are joining us. The Marathas and dalits have been friendly communities. We are just trying to create a united platform to raise our issues.”

Meanwhile, political observers are of the view that this newly-minted solidarity between the two communities could change state politics. “Both these communities are politically important in the state. If they come together on social issues, it will definitely impact politics. However, one needs to see how much time the relations will remain friendly,” said senior journalist, Prakash Bal.