According to police officials, the teenager, identified as Yogesh Jadhav, ran along with the demonstrators while they were being chased. 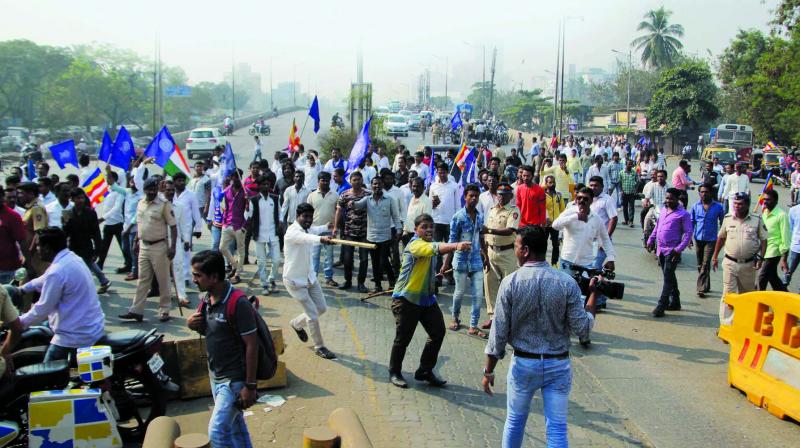 A massive shutdown called by Dalit groups and parties across Maharashtra was called off on Wednesday after a day of protests and sporadic violence. (Photo: Mrugesh Bandiwadekar)

Mumbai: A 16-year-old boy, who was part of the mob blocking a road during the Maharashtra bandh in Nanded city, was crushed to death while escaping police on Wednesday. The incident occurred in Hadgaon area of Nanded in Marathwada region in the afternoon when protesters were blocking a road, a police official said.

According to police officials, the teenager, identified as Yogesh Jadhav, also ran along with the demonstrators while they were being chased in the violence struck state.

"He, however, lost his balance and fell on road. He suffered serious injuries to his forehead and other parts of the body as he was trampled upon by fleeing protesters," the official said.

"Jadhav was admitted in government hospital in Hadgaon, where he succumbed to his injuries," Hadgaon police station senior inspector Keshav Latpate told PTI.

Meanwhile, another official said that protesters have alleged that Jadhav died in police lathicharge. Jadhav's postmortem is not yet performed and his family members are yet to claim his body, Latpate said.

A massive shutdown called by Dalit groups and parties across Maharashtra was called off on Wednesday after a day of protests and sporadic violence.

The shutdown had generated tension in Mumbai and a number of areas across Maharashtra, as the state marked its third day of seething tension between Dalits and upper castes, mainly Marathas.

In Mumbai, demonstrators tried to block trains, metro and buses, and forced shops in some areas to shut down. Two major roads in Mumbai's Bandra were blocked.

Chief Minister Devendra Fadnavis has ordered a judicial inquiry into the violence.