The gold was concealed in the handles and inner metal frame of the trolley bag. 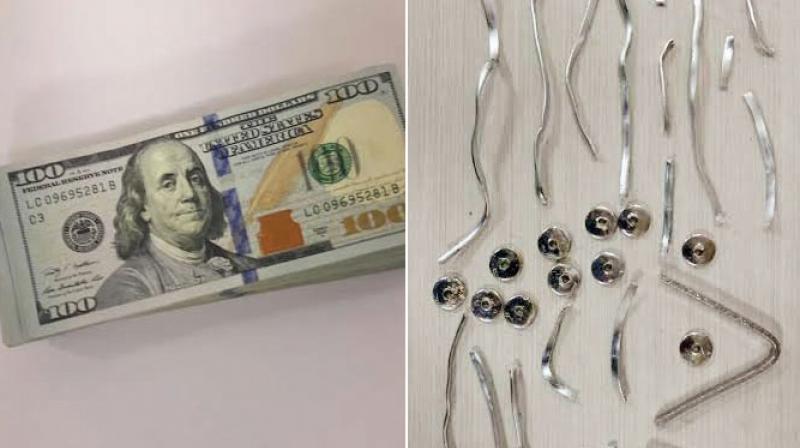 AIU officers in the small hours of February 1 intercepted a passenger named Muhammed Jalal Mullakoyathangal holding an Indian passport and about to depart to Sharjah, UAE, by Air India Express IX 251. Upon searching his belongings, 71 notes of Canadian dollars of denomination 100 each and 88 notes of Pound Sterling of denomination 50 each were found in his hand baggage. The notes, cleverly concealed inside layers of clothes in the hand baggage, amounted to Rs 722,530.

During day shift on February 2, a second passenger named Nitin Trilokchand Kothari also holding an Indian passport and about to depart to Bangkok by Jet Airways flight 9W 60 was intercepted. He was found carrying 13,600 USD equal to Rs 916,640. The same day during night shift, a third passenger, Thayyil Majeed, holding an Indian passport and having arrived from Dubai by Indigo 6E 62, was intercepted. His check-in baggage contained gold shaped in the form of a ring weighing 1.235 kg and valued at Rs 3,277,591. The ring was concealed in the periphery of a vacuum cleaner kept inside. Mr Majeed admitted that the seized gold belonged to one Mohammed Ali and he had carried it as he was going to be paid Rs 15,000 for the job.

In a fourth case the same night, a woman passenger named Nayeem Banu who had arrived from Dubai by Emirates EK 506 was found to possess 16 white gold strips and 12 white gold washers collectively weighing 1kg and valued at Rs 30,00,000. The gold was concealed in the handles and inner metal frame of the trolley bag. Ms Banu admitted that it belonged to one Arif Ahmed who lived in Dubai.